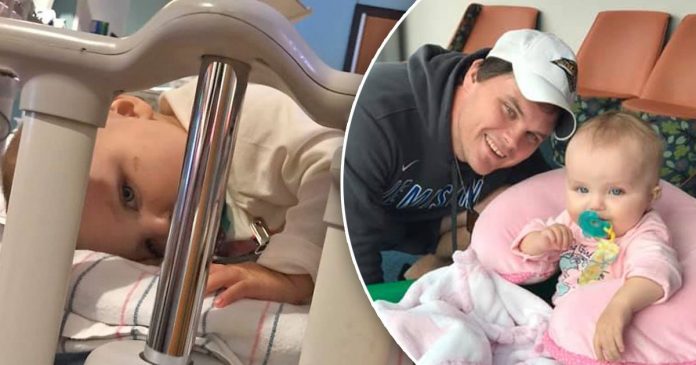 Kinsley Green had not celebrated her first birthday yet when the infant was diagnosed with acute lymphoblastic leukemia.

When her parents, David and Megan Green were told about the diagnostic test last October, their lives quickly turned upside down.

“On Saturday, October 20th, we were at my sister’s engagement party and by Monday we were in the ER being told, ‘You don’t want to know what I’m thinking’ and ‘We are so sorry, but we believe your daughter has cancer,’” Megan wrote.

The Green couple together with their baby daughter spent the next few months in the Birmingham hospital where Kinsley received multiple rounds of chemotherapy.

Kinsley even celebrated her first birthday and spent holidays in the hospital.

However, as the hospital is 100 miles away from their home, Megan had to quit her job to take care of Kinsley. Meanwhile, David regularly drives three hours to visit his daughter at the hospital.

Unfortunately, David ran out his sick leave at work by March.

David is a dedicated history teacher and football coach at Mae Jemison High School but at the moment, all he wants is to spend more time with his cancer-stricken daughter.

So, Megan later wrote on Facebook and asked any Alabama teachers who could donate their sick days to David to help their family.

Megan did not expect much but thankfully, her post received an overwhelming response from other teachers.

“We were blown away with the response that we received with the sick days. We were hoping to get a couple days so he could be here once a week,” Megan said.

Apparently, teachers around Huntsville later donated a total of 100 sick days to David, including Wilma DeYampert, the assistant principal at Lakewood Elementary who is battling breast cancer.

“I could not imagine having a child and being away from the child,” Wilma told CNN.

“So, I just thought it was the right thing to do. My mom always said, ‘You don’t have to be rich to bless someone.’”

Thanks to the kind donation, David now could spend more time with 16-month-old Kinsley.

“It is a huge blessing and we can’t wait until we are in the position to give back and help others,” Megan said.

Kinsley still needs to receive inpatient treatment for several more months and after that, the adorable baby girl will continue her treatment for two years.

You can support the family by donating to their GoFundMe page.