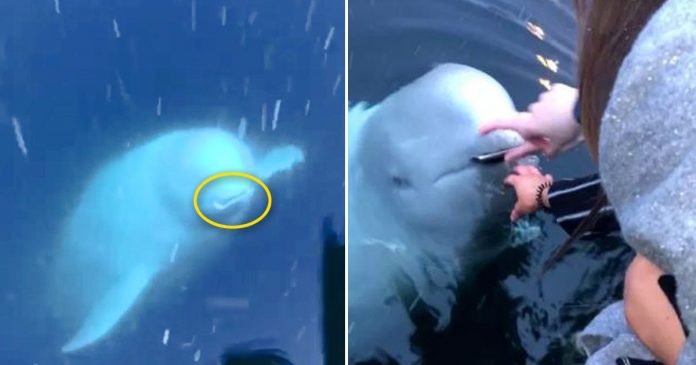 Forget about getting it back! Most of the time when we accidentally drop anything into any deep waters, there is a very slim chance to retrieve it back.

However, this lucky woman had a kind-hearted aquatic friend who helped her find her lost gadget when she accidentally dropped it into the ocean.

Ina Mansika and her friends were headed for Hammerfest, Norway in search of the beluga whales when they suddenly spotted one in the middle of the ocean.

Ina was clearly excited at the rare sight of the beluga whale that she later accidentally dropped her phone into the ocean.

Just as when she thought that it was over when her phone dropped into the ocean, the beluga whale saw the incident.

“We laid down on the dock to look at it and hopefully get the chance to pat it,” Ina said.

“I had forgotten to close my jacket pocket and my phone fell in the ocean. We assumed it would be gone forever, until the whale dove back down and came back a few moments later with my phone in its mouth!”

In the video, the clever mammal dove back underwater to look for Ina’s gadget. It then returned to the surface with Ina’s phone in its mouth!

“Everyone was so surprised. We almost didn’t believe what we saw. I was super happy and thankful that I got my phone back.”

However, as the phone dropped into the deep water and had irreversible water damage.

Needless to say, Ina was thankful to the kind beluga whale who quickly jumped into action to rescue her phone.

Watch the amazing moment the beluga whale gave the phone back to Ina here.

Just look at these multi-colored giant squirrels that seem too fantastical...