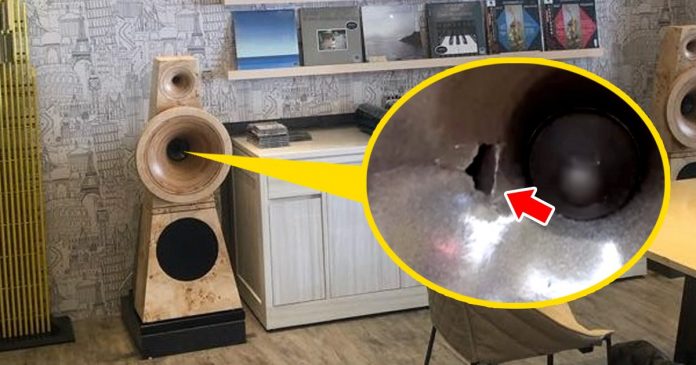 A mother recently took her 3-year-old son to a coffee shop in Taipei, Taiwan. Just like any other young child, her son was very active and was running around the coffee shop.

The employees at the coffee shop had to warn the mother multiple times for not letting her active son running around the shop for fear that he would end up breaking things.

“Boy, you cannot touch that!” one of the employees said when he saw the boy attempted to climb up the audio system. Unfortunately, what they feared the most came true.

Just a moment after the boy climbed onto the expensive audio system, they heard a snap.

Upon finding that their high-end audio system had broken due to the mother’s negligence, the shop then asked her for compensation.

At first, the mother seemed to agree to pay for the damage her son had caused. Everything seemed to be well when the owner of the coffee shop and the mother discussed the compensation. They even went to a police station to file a formal report about the damage.

However, three days later, the woman later changed her mind when she heard that she had to pay 900,000 Taiwan Dollar (US$28,927) for the broken audio system.

The mother who was identified as only by her surname Zhang refused to pay and asked the employees of why would they placed such an expensive audio system in a coffee shop.

“How did you prove that my son broke the audio system? Do you have any proof that he was the one who broke it?” the mother asked the owner of the coffee shop.

When the owner heard the mother’s excuses, he felt both frustrated and furious. It was obvious that the mother saw her son climbing onto the speaker and damaged it.

Their dispute went on for quite a while. Then the lawyer who represented the mother argued that it was unfair for the coffee shop owner to ask the customer who paid between 70-80 Taiwan Dollar (US$2.25-2.50) for a cup of coffee to charge them further for the damage at the coffee shop.

“The drinks are priced under 80 Taiwan Dollar (US$2.50) but he placed such a high-end audio system at the coffee shop which is obviously not quite the same,” the lawyer said.

Hearing the lawyer’s words, the coffee shop owner said, “I deeply care about the customers’ comfort and how long they have to wait for just a cup of coffee sometimes.”

“As the owner, I just wanted my customers to feel that it is worth to buy drinks from my shop. That was why I placed the audio system in the shop. Am I wrong?”

He also said that there are times when many people asked him why did he allow young children to enter his coffee shop.

“I cannot say no when all mothers want is to just sit down with their children to have a cup of coffee, tea or dessert. Obviously, I expect them to keep an eye on their children when they are in my shop,” the owner continued.

“Her son has just broken my audio system and you want me to just pay no attention to it and bear the lost all by myself?”

When the news came viral on social media, many users shared their thoughts that the lawyer’s argument was not convincing enough and that it was the owner’s right to claim for compensation.

“The store has already reminded, it is obvious that the mother failed to keep an eye on her son. It is not every time that the customer is always right, at least not in this case,” the comment wrote.

Well, that should serve as a huge lesson to both the mother and the son to behave well in public and not to damage other’s properties!