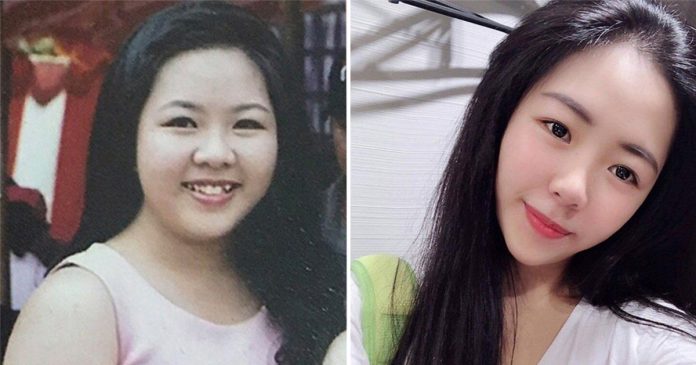 At first glance, no one would think that 20-year-old Quế Hương who works as a flight attendant used to look differently compared to today.

In her old photos, 19-year-old Quế Hương looked anything but a flight attendant. She was much heavier and larger.

Due to her being overweight, she looked bulky and heavy that she did not even dare to look at the mirror.

“Before I lost weight, I noticed that whenever I was in public, people would laugh at my body, “Quế Hương said.

However, it was not until Quế Hương discovered that her former boyfriend had actually found a new love who looked nicer and more beautiful than her that she decided to do something.

Upon finding out that her ex-boyfriend had a better looking new girlfriend, Quế Hương became determined to lose weight.

Nevertheless, it was not an easy journey for her.

Quế Hương had to borrow some money to sign up for a year membership at the gym and she also made drastic changes to her diet.

Following her determination to lose weight, she stopped eating food that is high in calories and began a strict diet consisting of lean meat, fish, chicken breast, yogurt and lots of vegetables.

After successfully dropping her weight to 57 kg (125 lbs), Quế Hương then took English classes and applied for a position at Jet Star as a flight attendant.

Luckily for her, it seemed that all of her hardwork had paid off!

“‘The most important thing about this whole process is perhaps your reason and willingness to lose weight, right from the start. It may be frustrating at first, but just keep on doing it and you will succeed,” she said.

The weight loss has also helped her to become confident again.

“Now it’s different. When I am walking on the streets, people look at me with admiration and pass me praises when they used to scorn me.”

“Looking back at my old photos, my only regret is that I should have lost weight way before the breakup so that I could enjoy my youth better,” she concluded.