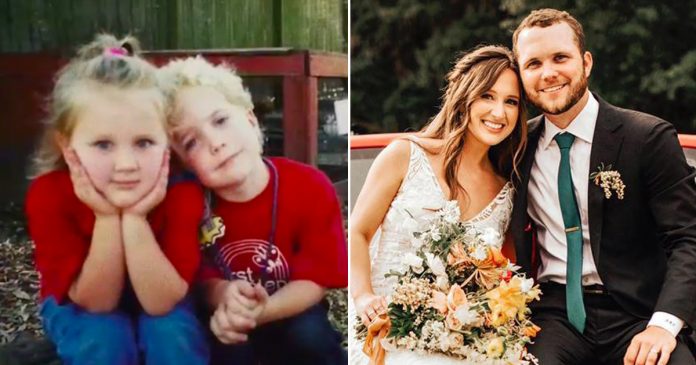 If you’ve never really believed in destiny and soulmates, this sweet story might just change your mind. Newlyweds Natalie Crowe Tatman and Austin Tatman’s blossoming relationship sounds like something straight out of a fairytale.

They tied the knot in April, but their special bond began in pre-school when they were just five years old.

They were practically tied at the hip as children, but suddenly, Natalie had to move away from Ocala, Florida. She lost contact with her very best friend, but she never forgot about him.

One day, she decided to reach out to him on social media, and the pair reconnected as teens.

On their second date, they knew it was meant to be, and the rest is history!

As a sweet touch for their wedding day, Natalie and Austin decided to recreate a cute photo from back in 1999, where they stood next to each other in Austin’s toy Jeep Wrangler.

“It’s strange when you’re that age — you don’t usually hang out with the opposite sex. But from when we were 2 until we were 5, we were constantly together.”

It turns out they had more than their deep friendship in common. They discovered they were both due on Valentine’s Day—what are the chances! But Natalie was born two weeks after her due date, while Austin arrived two weeks earlier.

Although Natalie and Austin were so young, they both made such an impression on each other that they had fond memories of each other over a decade on.

“Every picture that we have—even in a group—we were together and then everyone else was on the side,” Natalie said.

“I just basically have memories of always being with him, regardless of whether I remember the detail of the memory or not, I knew we were always together.”

She was devastated the day she had to move away to Connecticut following her parents’ divorce. She had no idea if she would ever see her best friend again.

“My last memory of him is [when] we made Rice Krispy treats in his parents’ kitchen… and then we were separated,” Natalie said.

Although they lost touch, he was on her mind all the time, and asked her mom if she thought he would remember her.

“I briefly remember when I was 8 and 10, I would ask my mom about Austin and she would say, ‘I’m sure if you remember him, he remembers you,” she recalled.

“But I had no way of getting in touch with him at the time.”

Then one day, on July 17 2012, Natalie, who was 17 at the time, found her mom’s old address book and happened to stumble upon Austin’s name. It was meant to be!

“I knew his last name started with a T, but I don’t know why — I still have no idea to this day why — I went to his name out of all the names that were in there. This thing was full,” she explained.

So of course, she tried to find him on Facebook, and recognised her childhood best friend instantly! She sent him a message, and they reminisced about old times.

She found out Austin was living just 10 minutes from her dad in Florida, so they agreed to meet on July 31 2012 when she was next there.

“Ever since that time, we’ve been together. It was like the second I saw him, it was a friendship that had come back to life instantly,” Natalie said.

On their second date, they knew their feelings were stronger than friendship.

“We both knew we were in love with each other after being on our second date,” Natalie added.

“We rekindled the friendship on the first day of reuniting and then being alone, it was like, ‘Okay, whatever time that may be, I’m gonna marry you.’”

After a year of long distance, they both attended separate colleges in Florida. Just a year after graduating, Austin proposed to her!

They tied the knot at The Mulberry in New Smyrna Beach, Florida.

Looking back, they wouldn’t have it any other way.

They believe fate brought them together in a series of unpredictable events, and can’t wait to spend the rest of their lives with each other.

“It was kinda crazy how everything came together so perfectly, and it still doesn’t make sense to me to this day,” Natalie said.

So sweet! Some people are truly meant to be, and time, distance and obstacles along the way won’t change that. Congratulations Natalie and Austin, we wish you all the best!

66yo sidewalk vendor in Manila provides after-school tutorials to students for...