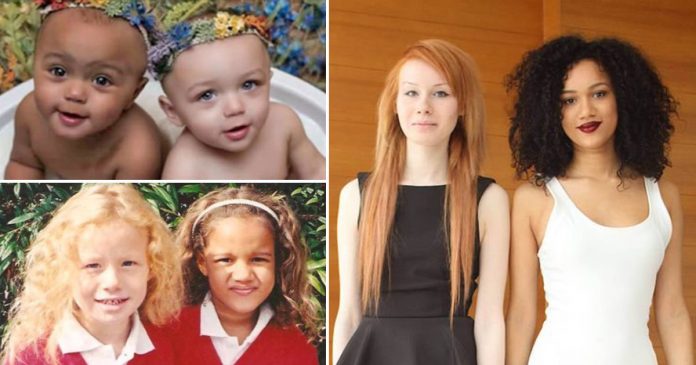 At first glance, it is hard to believe Lucy and Maria Aylmer are biological sisters and what’s more, they are twins!

The biracial twins who were born in 1997 to a white father and a half-Jamaican mother are used to hearing people assuming them as best friends.

To prove that they are actually twin sisters, Lucy and Maria even had to produce their birth certificates, as reported by Barcroft Media.

“No one ever believes we are twins because I am white and Maria is black,” Lucy told New York Post in an interview. “Even when we dress alike, we still don’t even look like sisters, let alone twins.”

Lucy has a very fair complexion and red hair as opposed to her twin Maria who has brown hair and a caramel complexion.

The striking differences between the twin sisters even took their mother, Donna Douglas, by surprise after she gave birth to her daughters.

According to Lucy, their mother had no idea that the twins would have different skin colors.

“It was such a shock for her because obviously things like skin color don’t show up on scans before birth,” Lucy explained when their mother saw them for the very first time after birth.

“So she had no idea that we were so different. When the midwife handed us both to her, she was just speechless,” she continued.

Their differences do not just stop at their skin and hair colors. Apparently, both of them have different interests and personalities. Lucy studies art and design at Gloucester College while Maria studies law and psychology at Cheltenham College.

The twin sisters also share three other siblings who have mixed skin color.

All our older brothers and sisters have a skin color which is in between Maria and I,” Lucy said.

“We are at opposite ends of the spectrum and they are all somewhere in between.”

In spite of the occasional glances and misunderstandings they receive from other people, Lucy said that their different looks have its own upside.

Looking completely different from each other have helped other people to not mistake them for one another.

“We were in the same class at infant school, but no one ever had a problem telling us apart,” she explained.

“Most twins look like two peas in a pod — but Maria and I couldn’t look more different if we tried. We don’t even look like we have the same parents, let alone having been born at the same time.”

While most of the time, children often inherit a combination of both of their parents’ features, there are rare cases like Lucy and Maria where Lucy inherited the genes for white skin while Maria inherited genes for black skin.

Stranger bought $750 plane ticket for man’s 2yo daughter when the...