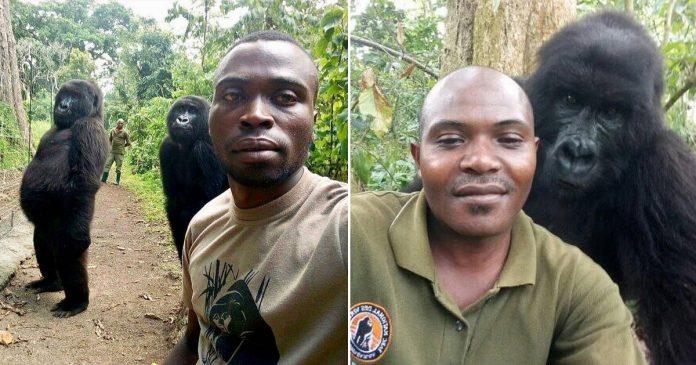 Last month, the hilarious selfie of two caretakers from Virunga National Park with two cheeky female gorillas made headlines across the world as the two primates took the chance to pose like humans.

The remarkable selfie quickly went viral on the internet after it was shared on Facebook by one of the caretakers, Mathieu Shamavu and has been shared more than 20,000 times.

However, there were people who doubted the authenticity of the selfie with many questioning if the photo was indeed real.

In response to the question, Virunga National Park took to Facebook and Instagram to confirm that the selfie was real and that the gorillas actually posed for the camera by themselves.

“You might have recently seen caretakers Mathieu and Patrick’s amazing selfie with female orphaned gorillas Ndakazi and Ndeze inside the Senkwekwe center at Virunga National Park,” they wrote.

According to the national park which is located in the Democratic Republic of Congo, the selfie was proof of how the two gorillas actually behave when the caretakers are around.

“Those gorilla gals are always acting cheeky so this was the perfect shot of their true personalities!” they continued.

“Also, it’s no surprise to see these girls on their two feet either—most primates are comfortable walking upright (bipedalism) for short bursts of time.”

In the cheeky selfie, the female gorillas, Ndakazi and Ndeze, appear to stand with their feet wide apart with one of them leans forward to make sure to get into the shot.

The two female gorillas are residents of the national park where both of them have lived there since they were infants.

According to Virunga National Park, both Ndakazi and Ndeze are close with their caretakers, hence, why it was possible for them to be naturals in front of the camera.

“We want to emphasize that these gorillas are in an enclosed sanctuary for orphans to which they have lived since infancy. The caretakers at Senkwekwe take great care to not put the health of the gorillas in danger,” they wrote.

“These are exceptional circumstances in which the photo was taken. It is never permitted to approach a gorilla in the wild.”