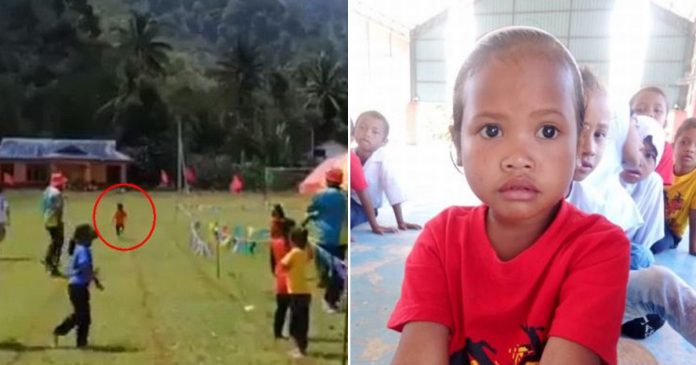 While everyone in the audience and on the track was cheering as the teams competed against each other in an intense relay race, one adorable girl decided to defuse tensions and bring laughter instead.

That was what Aishah Long, a 7-year-old schoolgirl from Malaysia did when she participated in a relay race by running in the opposite direction, causing the teachers to panic while the audience burst into laughter.

In the video which has quickly made rounds on the internet, the schoolgirl confidently runs in the opposite direction after her teammate passes her the baton in the 4×50 relay race.

The hilarious video which has a duration of one minute also shows the teachers in charge panicked as they have to chase after the girl to tell her that she is running in the wrong direction.

According to local newspaper mStar, the schoolgirl did not participate in the sports event initially.

However, when her friend who was supposed to take part in the relay race fell ill, Aishah Long volunteered to replace her.

“Her name was actually not in the list for the event,” said the school’s Assistant Principal, Megat Asrul Megat Mohamed Yusof.

“She took part in the relay race as a replacement for her friend who was absent due to a fever,” he added.

According to Megat Asrul, Aishah may be confused with the game held before the relay race began.

“Previously, she entered a telematch. In the telematch, there was a run shuttle game and shortly after the game finished, the relay race began,” he told mStar.

“Coincidentally, sports events for Year 1 and Year 2 students were held together. Since it was her first time to participate in school sports day and that she had to replace her friend, that was probably when the confusion occurred.”

When the video was shared on Facebook by user Mohd Hafis Ismail, many people also commented on how amusing the incident was. The video has amassed more than 988,953 views as of the time of writing!

Even though Aishah ran in the opposite direction, her team still managed to win third place in the relay race!

“Even though they lost to other teams in the race, Aishah’s team won the third place since there were only three teams competing,” Megat Asrul added.