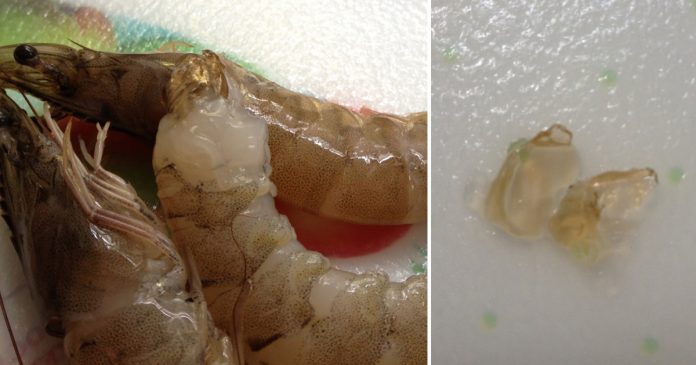 A woman in southern China was shopping for six expensive tiger prawns in October, when she discovered their heads had been injected with a strange gel.

The peculiar substance isn’t noticeable upon first glance, but the gel is often used to add weight to the shrimp to earn extra profit.

It’s not certain when exactly the gel is injected into the shrimp, but experts think it’s sometime between when they’re caught and when they go on sale.

Chinese shrimp for human consumption is injected with gel ?https://t.co/OClpfBQYfp

It can’t be injected into live shrimp, however, as the injection would kill it.

Gel-injected shrimp purchased by a Chinese Internet user, alongside a picture of the gel found inside them.

The discovery has caused concerns among many in the U.S. as China is the country’s third largest exporter of seafood.

But the horrific discovery goes back over a decade, with the first images of gel-injected shrimp going viral in 2005.

Footage Reveals Gel-Injected Imported Shrimp (EAT LOCALLY PEOPLE) If ever there was a reason to know where your food came from, here it is! Join our community of fearlessly independent thinkers, and natural health advocates: http://bit.ly/2kjN4HH

A decade later, in December 2015, an import alert was issued by the Food and Drug Administration, about the “presence of new animals drugs and/or unsafe food additives” from China imported seafood.

Upon further inspection, the gel was found to be edible—composed of collagen extracted from animal skins and bones.

Experts are worried that industrial gel may soon be used, as the operation is unsupervised and illegal.

“Industrial gel is used for furniture, print, and contains many heavy metals such as lead and mercury, which harms the liver and blood, and is even carcinogenic,” said Wu Wenhui, a professor at Shanghai Ocean University.

Salty gel injected into shrimp to make them bigger and heavier. It is called PLUMPING. No wonder we get cancer https://t.co/x6Gx7P4IGI

“This kind of shrimp has already been here for a long time. Beginning five years ago they came like this from the wholesalers,” a shrimp seller said back in 2012.

It’s alarming that wholesalers and retailers are willing to risk the health of consumers just for the sake of profit!

Next time you buy shrimp imported from China, you may want to double check it hasn’t been injected with the gel substance.