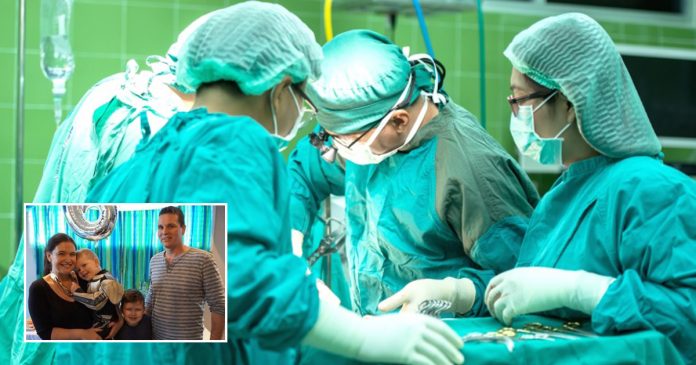 As if he knew that he would take his very first breath in the world, little Harry wanted his debut to be grand so he adopted a superman pose just seconds after he was born.

Luckily, his proud father was ready to capture the incredible moment the moment Harry entered the world.

Apparently, Harry’s first pose in front of the camera not only shocked his parents but also everyone in the room!

In the photo which has been making rounds on social media recently, baby Harry can be seen striking the iconic Superman’s pose with his tiny fist in the air as soon as he was pulled out of his mother’s womb.

The newborn was born via a Caesarean section at 40 weeks due to his large size and weight. He weighed 4 kilograms at birth.

His mother, Bree Jessica, wrote that she saw Harry for the first time when his baby made the adorable pose.

“It was a surreal experience, seeing Harry being born and seeing his face for the first time,” she recalls although it has been seven years since Harry was born.

In spite of the image being captured many years ago, it was not until recently that Bree Jessica thought of sharing it with the world.

She initially shared the extraordinary photo on social media to celebrate Caesarean Awareness Month which runs throughout April after her doula friend, Jade Jeyaratnam asked for a story.

“I never showed anyone the photo or thought much of it,” Bree said to Daily Mail.

“But when my friend asked if I had any photos of my boys’ deliveries for C-section awareness and then she published it on Instagram, I had people reaching out to me in support of the picture.”

She was also proud that her post has helped “empower other women in their birth journey.”

“I’m proud my photo could be helping other women,” she said.

Meet Mahdis, 7, the Iranian beauty and Instagram star who has...