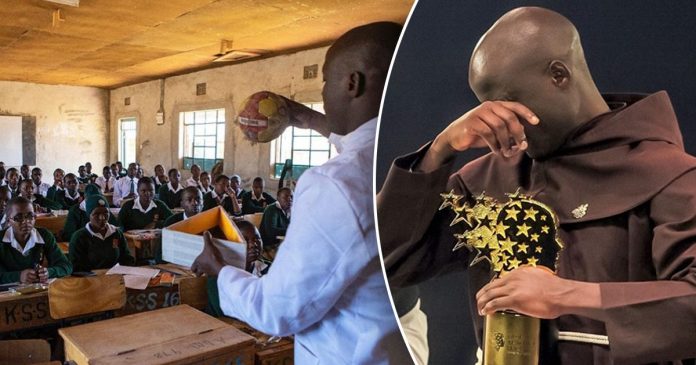 A Math and Physics teacher from Kenya has won $1 million Varkey Foundation Global Teacher Prize, an award given to the teacher who has made an outstanding contribution in the noble profession.

He emerged as the winner of the grand prize out of 10,000 nominated teachers from 180 countries across the world.

The 36-year-old teacher at Keriko Mixed Day Secondary School in Pwani Village showed his passion in teaching and changing his students’ lives for the better even when 95 percent of his students are extremely poor and a third of them are either orphans or have a single parent.

Drug abuse, teen pregnancies, drop-outs, and suicide are some of the common problems he encounters at school apart from the fact that the school only has one computer and a student-teacher ratio of 58:1.

“I’m immensely proud of my students, we lack facilities that many schools take for granted,” Tabichi said.

Despite the challenging circumstance he is in, Tabichi managed to increase enrolments to double by introducing Talent Nurturing Club and expanding the existing Science Club.

Thanks to his creative initiatives, not only that more students started to come to school but they also won first place in public schools category of Kenya’s Science and Engineering Fair 2018 with their device to help blind and deaf people to measure objects.

Tabichi’s students have also won various national science competitions and even participated in the Intel International Science and Engineering Fair 2019.

For most of these students, getting into college used to seem like a far-fetched dream. However, Tabichi has helped to turn the tables. In 2017, only 16 out of the school’s 59 students made it to college but the number increased to 26 in 2018.

As if that is not enough, Tabichi also donates 80 percent of his monthly salary to aid local community projects including his school and the development of sustainable agriculture in Pwani Village.

“Seeing my learners grow in knowledge, skills, and confidence is my greatest joy in teaching,” he said.

“When they become resilient, creative and productive in the society, I get a lot of satisfaction, for I act as their greatest destiny enabler and key that unlocks their potential in the most exciting manner.”

“So as a teacher, I just want to have a positive impact not only on my country but on the whole of Africa.”

The Global Teacher Prize is an event to celebrate teachers around the world who often have to work in a resource-constrained environment and receive little recognition for their work.

Tabichi is the fifth person to win the prize and the first African to be honored with the award.