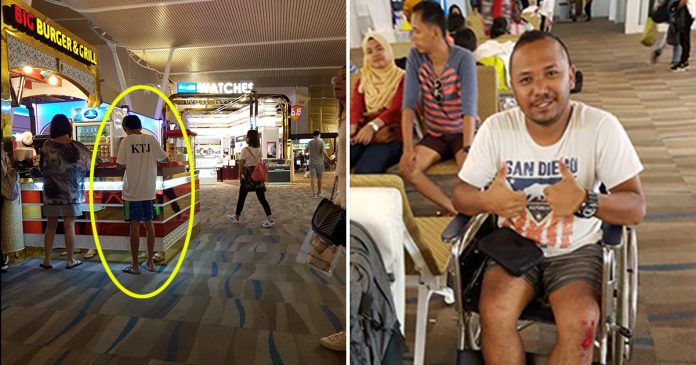 This man was involved in a terrible motorbike accident when he was on a vacation at a foreign country. Alone and injured, he did not expect anyone to offer him a help when he was about to board the flight back to his country but a young boy changed his perception.

Ady Sacol who came from the Philippines was involved in an accident during his holiday trip in Phuket, Thailand recently. According to a post dated March 5 that he wrote on Facebook, Ady wrote that he and his friends rented motorbikes for a 9-hour epic tour around Phuket.

Unfortunately, the tour ended with him getting into an accident which left him with severe injuries to his ankle and knee.

Consequently, he had to use a wheelchair to move around as he was unable to walk.

Following the accident, he decided to end his trip earlier than what he had planned. It was certainly difficult for him to travel back to the Philippines on his own with his injured leg but thanks to a 13-year-old Malaysian boy named Sean whom he met at Phuket International Airport, he was able to make it through.

According to Ady, Sean had to go back to Malaysia after he received a piece of sad news that his grandfather had passed away.

The boy had to withdraw from the basketball competition he joined earlier and take the earliest flight to attend the funeral.

“Sean was sitting beside me on our boarding gate and I think he knew I was injured because I was on a wheelchair (other than my obvious no bandage-swollen-reddish-full of blood wound on my knee and foot).

He then asked me “Are you hungry, tell me what food you want to eat?” I was trying to get my wallet but Sean insisted that he will be paying for it,” Ady wrote.

Sean wears a white T-shirt with KTJ printed on the back. Apparently, that was just a beginning to Sean’s series of kind actions.

When they were waiting to board the gate, Ady and Sean were told that there had been a boarding gate change. Instead of leaving Ady to reach the gate on his own, Sean helped him by bringing his 15-kilogram backpack through a 15-minute walk from gate 4 to gate 14.

“Sean also accompanied me on the special vehicle used to transport disable passenger to the aircraft”.

When their flight arrived in Malaysia, Sean again assisted Ady and brought his backpack until the airport buggy arrived. “When we arrived at KLIA2, there was no wheelchair available, Sean with my 15KG backpack assisted me like his own brother or uncle or his best friend walking from the tube trying to carry me to the best of his ability until the airport buggy arrived. But the buggy will only transport me on the 3rd Floor so we need to use the lift to go down.”

“Unfortunately, no buggy nor a wheelchair is available as well on the Second Floor. What Sean did, he took a cart and he told me to sit down on the cart then he started pushing it till we reached immigration.”

Since foreign and Malaysian passport holders have their respective line for immigration, Ady and Sean parted ways. Ady had already thanked him and told Sean how grateful he was for his tremendous help.

However, he realised that Sean was waiting for him outside the immigration line.

“So, we parted ways. I already said my Thank You and told Sean how grateful I am with his help but after I was done and went outside Sean was waiting still, brought a cold juice for me, unloaded my luggage from the carousel, pushed the cart for me and never left my side until I told him so since his driver and house help arrived.”

“He still insisted to let his driver helped me but I declined as I received too much help from him already,” Ady wrote.

Since Ady’s flight to the Philippines was in ten more hours, they had to say goodbye. Just before they parted ways, Ady gave Sean a Philippine banknote with a special message written on it.

“Sean, remember the Philippine Money I gave you which I wrote something on it? I said the money doesn’t have a value at all, its the message that is more precious and priceless. Keep it as a simple remembrance of our very short but memorable time together.”

“This wasn’t a coincidence. You are my angel and I can’t thank you enough for your kindness and generosity. You are a treasure to your family and friends. I will always remember you for the rest of my life”

Ady wrote that the experience has truly opened up his eyes that how important that is for us to cherish every connection we have whether the connection is our family member, colleague, friends or even strangers

“Funny how we as adults think our world is full with our small circle of friends but yet fear the world is so big. It’s just the opposite I tell you. As your connections expand the world becomes smaller and far less scary and much less daunting”

To Sean, thank you for your willingness to help a stranger who is in a dire need of help. Even though you are just 13 years old, you just proved to the world that there is no reasons needed when it comes to helping others.