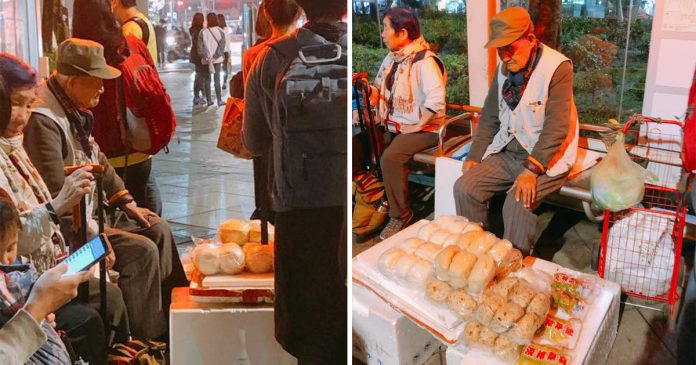 While many people in their golden age get to enjoy their retirement days relaxing at home, this 105-year-old man has been left with no such luxury as he still has to work day and night and take care of his ill son.

In a Facebook post that has made rounds on social media lately, the elderly man earns a living by selling “mantou” which is Chinese steamed bun in Taipei, Taiwan at his humble stall to support himself and his son.

According to the post, the old vendor hails originally from Shandong, China but was forced to stay in Taiwan after his son suffers from a mental illness due to drug addiction and diabetes.

To support his small family and pay for his son’s pricey medical fees, the elderly has been working hard, day and night to sell mantou.

During the daytime, he can be found at his stall in Jingmei and then moves his stall outside of the Wanlong station in the evenings.

The netizen who posted the story about the old man came to know about him after frequently passing his stall.

The netizen became concerned with him after she saw the elderly often skipped dinner.

In her post, the netizen did try to ask him if he wanted something to eat for dinner but as the old man could not properly hear her, he failed to answer her. Nevertheless, she often brought the old man food of which he was really grateful for.

The netizen also added in her post she wished for the elderly’s story to be known by the public in hopes for more people to offer him help in any possible ways and also to boost his mantou business.

“I’ve seen that there’s still a lot of mantou left when it’s late at night. There are a lot of people passing by the bus station, so why not take away a bag of mantou to eat at home while you’re in the process of waiting, as it’s really value for your money!” she said.

So, if you happen to be in Taipei, why not pick up some fresh mantou from the hardworking old man.

It may not be much but it will surely help him to support his family and sick son.