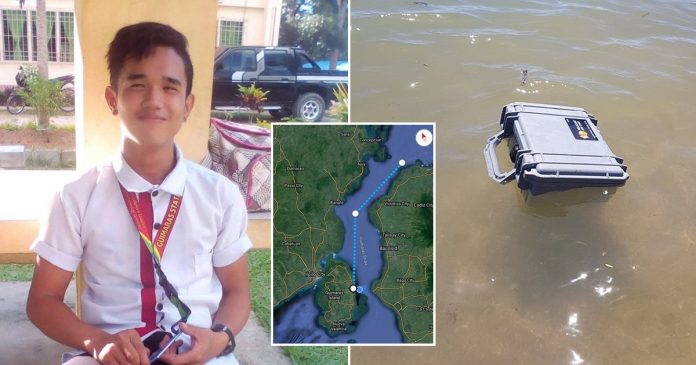 What would you do if you found a floating case in the middle of the sea full with some of the latest and expensive gadgets like iPhone XS Max?

For 20-year-old Nichol Tagudin, he certainly returned the case back to its rightful owner.

The BIT Automotive graduate has earned praises from the netizens for his honesty after he returned a Pelican case that contained expensive gadgets when he went fishing in Guimaras sea.

Tagudin who went fishing with his father accidentally found the case floating in the sea.

However, the man from Buenavista, Guimaras never expected to find valuables inside the Pelican case.

According to Tagudin, when he opened the case, he saw gadgets like iPhone XS Max 256GB, a power bank, and other stuff.

In spite of the prized treasures, he knew that returning the case and the gadgets to their owner were the best thing he should do.

After he returned to land, he quickly searched for the owner of the gadgets.

It turned out that the case and the gadgets belong to 14-year-old Ethan Atienza.

Atienza had lost his Pelican case when he was riding a jet ski from Lakawon Island, Cadiz City to Manapla, Negros Occidental.

During the ride, he lost control of his jet ski and fell into the sea. He later realized that he lost the case but thankfully, he was told the case was found by someone from Guimaras six days later.

Apparently, the case traveled 50 miles in the sea before Tagudin found it.

Following Tagudin’s discovery, Atienza and his father then went to Guimaras from Bacolod City to retrieve the case and thank Tagudin’s for his honesty.

To express their endless gratitude, Atienza’s father, Giff even gave Tagudin PHP11,000 (USD211) as a reward. He also offered Tagudin a job when he learned that the graduate was looking for one.

“Your school, your parents, your friends and everyone around you is very proud of you! Thank you Nichol!” Giff wrote in his Facebook post.

“And to your proud parents FLORENCIO TAGUDIN JR. and VICKY TAGUDIN you raised your son very well, God Fearing and again, Honest! Thank you and may God Bless You always!”