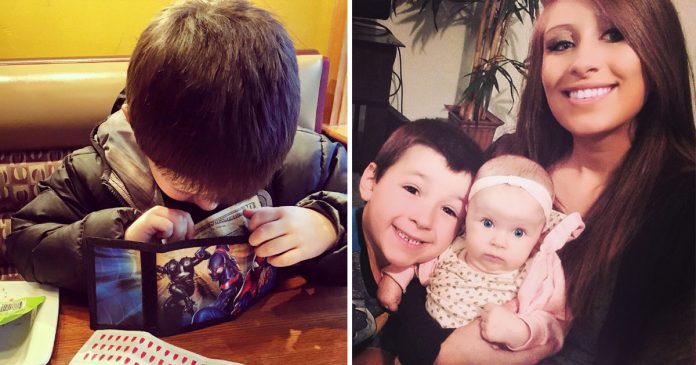 Lyle Drummonds may be only six years old but this young boy is already quite a gentleman!

Once a month, Lyle takes his mother to a dinner date and even pays for the meal from his pocket money.

According to his mother, Nikkole Paulun, Lyle has already mastered some of the behaviors that a gentleman would do.

“He opens doors for me, pulls out my chair, talks about his day & asks me how mine was…and even tips the waiter/waitress [sic],” Paulun wrote in her Facebook post.

22-year-old Nikkole even wrote that they have a specific “no-electronics” policy during their dinner dates. She then added the strict policy allows the two of them to enjoy their dinner and have a conversation without the distraction of smartphones.

“We put our phone and iPad away (except to take this photo) and sit and talk to each other about our days, things we want to do, etc,” Paulun wrote.

“I’m teaching him proper table manners and that it’s rude to sit on your phone on a date with your mom or with anyone else.”

In her Facebook post which has gone viral with more than 2.9 million likes and 192,000 comments, Lyle who can be seen sitting across Nikkole is opening his wallet and pulling some notes to pay for their dinner.

According to Paulun in an interview with ABC News, she came up with the mother-son dinner dates as a way to teach her young son the importance of treating women with respect at an early age.

“The reason I started the dinner dates was [because of] the fact that I had been treated poorly in the past,” Paulun said.

“I see so many girls I know get treated badly, and I wanted to make sure my son didn’t grow up to be like that. I suggested we start doing mommy-son dates and he loved the idea, and still does.”

They have been going on dinner dates for four months. “It’s a special day every month for him to feel like a big guy and get to spend extra time with mom. It’s definitely made us closer,” Paulun said.

As for now, Paulun said that her lessons of respect and good manners are “working well” as Lyle uses the manners he learned during their dinner dates to interact with others at school.

“I have seen him use his politeness everywhere. He will ask people who come over questions about their day or their life. It’s so cute,” Paulun said.

Looks like Lyle will grow up to be a true gentleman indeed!