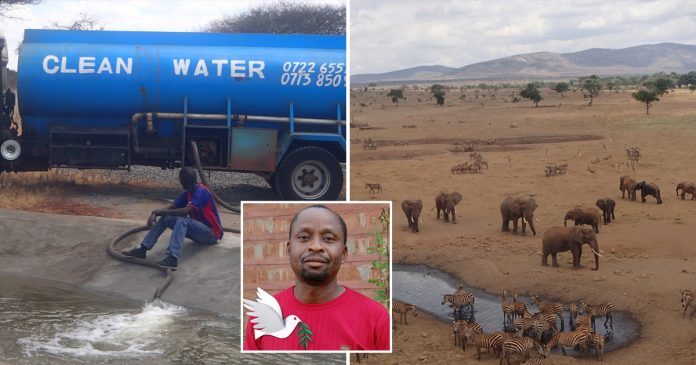 The world is going through unprecedented changes in terms of climate and it is experiencing highly erratic weather patterns in certain parts of the globe. Kenya has been struck by a terrible dry spell and the prolonged drought is disastrous to both humans and animals alike.

The drought is making it hard for people to keep up their agricultural activities and this has led to a decrease in crop yields. Animals are also suffering as their water holes are slowly drying up.

Luckily, this man who was dubbed “Kenya’s water man” is here to save these animals from dying of dehydration. As his nickname suggests, Patrick Kilonzo Mwalua, drives for hours to supply animals with the precious liquid cargo.

Patrick works as a pea farmer in a small Kenyan village. He drives out on four evenings a week to the drought-stricken Tsavo West National Park and supplies the animals there with water.

The 41-year-old drives his massive water truck, carrying over 3,000 gallons of water to the park and empties the load to huge concrete bowls for the animals to drink from.

The animals, which include elephants, zebras and antelopes have become so used to the routine that they can be seen waiting in the area for Patrick to refill the bone dry bowl.

Patrick does this at his own cost and says the situation is so dire that if he does not do it, the animals will surely die from dehydration.

The animals get excited when they hear Patrick’s truck and crowd the area when he arrives. He recalled one incident where he found over 500 buffaloes waiting near a watering hole for his truck and said “When I arrived, they could smell the water. The buffalo were so keen and coming close to us. They started drinking while I was standing there. They get so excited.”

When word of his noble deeds got around, many people wanted to contribute to his cause and help him in some way. A group of three American women set up a GoFundMe to help him and so far it has raised over $130,000 towards his cause which covers the rent of the truck and petrol.

Watch the inspiring story below: