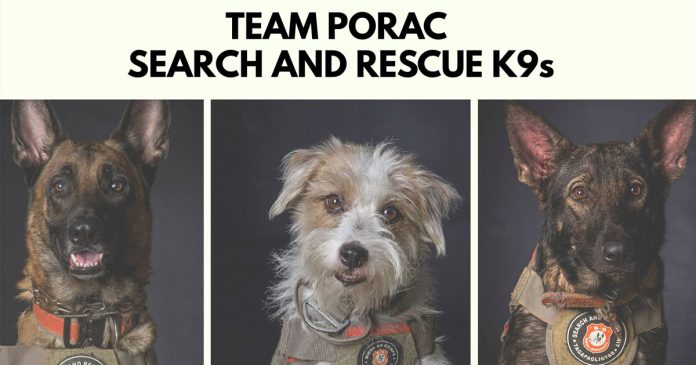 Meet these adorable fur heroes. These are the nine volunteer rescue dogs who helped to save lives following the 6.1 magnitude quake in Luzon on Monday, which killed 16 and injured dozens.

This brave team of pooches helped to identify survivors among the rubble after a supermarket collapsed in Porac, Pampanga.

ATM… at ground zero in Porac, Pampanga. Our team was deployed today to help in the rescue operations.We would like to ask for prayers for the trapped victims and rescuers as well.

Meet the team of the Metropolitan Manila Development Authority! The initiative began in 2012.

Although only three are photographed above, here are their names: Billy, a 3-year-old Belgian Malinois, Thunder, a 5-year-old Jack Russel Terrier, Farah, 2, and Cody, 1, both German Shepherds, Lucy, 1, and Dumbo, 4, Dutch Shepherds, and Chia, 2, and 5-year-olds Chaplin and Ringo, all Labrador Retrievers.

The MMDA volunteer group joined forces with canine teams of the Philippine Air Force and Philippine Coast Guard for this particular operation!

With the help of the K9 team, rescuers were able to locate a survivor and employee of the supermarket, Grace Melchor.

After the long day of rescue operations, the dogs were tired but still okay, said Sheryl Maon-Palcis, head of MMDA K9’s information and planning office.

“The dogs are okay but super tired because they worked all day in the heat,” she said.

Sheryl said the dream team had also helped out in other search and rescue operations in the country, such as during the tragic landslides in Cebu, Naga and Itogon.

There’s nothing these cuties can’t do.

To boost their morale, the fur heroes are rewarded with the simulated discovery of a survivor following each ‘mission’.

“The victims cannot give them a reward so, in order for them not to get frustrated and to boost their morale, we ask someone to hide for them as a kind of reward, we give them either praise or a toy reward,” she explained.

On Wednesday, a smaller magnitude 4.7 earthquake hit Davao Oriental from beneath the sea at 11.43 am local time. The quake originated 63 kilometers northeast of Baganga, Davao Oriental.

Fortunately, no tsunami warnings were advised.

Netizens were quick to praise the adorable furry team for their brave efforts.

“I salute to all fur heroes & their handlers.you’re so amazing,” one person commented on Facebook.

Another said, “Congratulations my fur heroes! You’re so amazing. I saw you on TV and what a job it was! Thank you for sharing your time and effort in helping in times like this. To the handlers thank you too for taking care of these furbabies. I salute you all!”

While one added, “I hope they get lots of love & cuddles, yummy treats/food, clean water & enough rest!!! They deserve it!!! God bless fur heroes!!!”

Puppies fell into a pit with a venomous King Cobra, however...