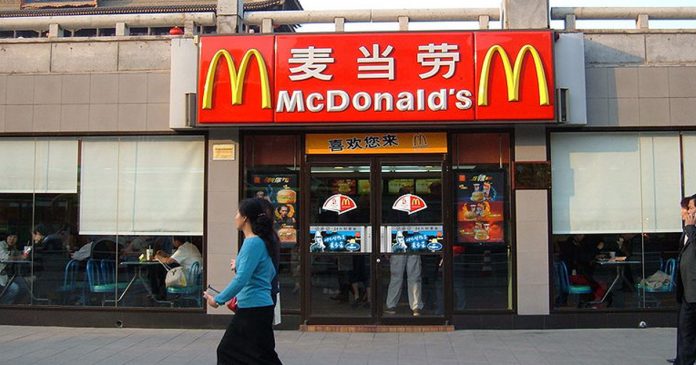 A family in Beijing got a nasty surprise when they ordered fried chicken wings from McDonald’s, only to find they still had their feathers attached.

Photos of the feathered food quickly went viral on Weibo—China’s version of Twitter—with many expressing their anger and disgust at the American fast-food chain.

The family ordered four chicken wings from McDonald’s and had already eaten three.

When the mom saw her daughter biting into the final one, she was horrified when she saw the feathers still attached to it.

“I saw it when the child was eating it … biting right down onto the feathers,” the mom told Pear Videos, major Chinese short-video news outlet.

The dad added, “This is the chicken wing that my precious daughter was eating at McDonald’s.

“If your kids are going to have this, or if the adults are going it eat it, what is the wing going to be like?”

No parent would ever want their child to consume the feathery chicken wings, imagine if she had choked on them!

Although the daughter’s health is ok, the mom said she has been affected psychologically by the whole thing. It’s safe to say she won’t be eating McDonald’s chicken wings for a while…

McDonald’s have since apologised for the incident. “McDonald’s China has paid great attention to this incident, and [we’ve] opened an investigation,” it posted on Weibo.

Unsurprisingly, this isn’t the first time people have discovered a little something extra in their McDonald’s chicken items. Take a scroll below for just a few of the nasty treats we found.

1. A netizen posted back in 2013, “WTF! My chicken wings from McDonalds still has feathers on it…”

3. “Thanks @McDonalds for letting me know you use real chickens? This feather deep fried on my McNugget is disgusting,” another internet user posted on Twitter.

Thanks @McDonalds for letting me know you use real chickens? This feather deep fried on my McNugget is disgusting. pic.twitter.com/v5reAZtdaz

That moment when you find the bottom piece of a feather in your McDonalds Chicken Nugget ? pic.twitter.com/hlgcoxI3kW

5. Not what he was expecting.

7. This girl got more than she bargained for…

Shout out to @McDonalds for having an actual feather in my mcchicken pic.twitter.com/h3N56Lm1pg

@McDonalds @lauriepizarro WHY IN THE DINGLE DICK DID I JUST FIND A FEATHER IN MY CHICKEN NUGGET. pic.twitter.com/uzSCI7Mj44

Nothing worse than finding a feather in your @McDonalds chicken nuggets. Sweet. pic.twitter.com/djgfEav3

We’re not sure about you, but we’re definitely going to steer clear for a while.