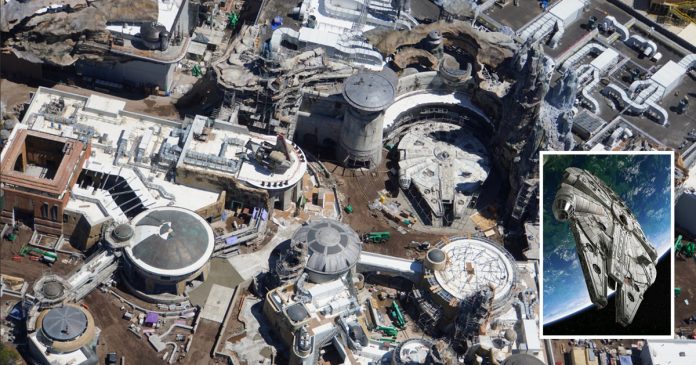 Star Wars fans are bracing themselves for Disney World’s new $1 billion amusement park which looks like it’s straight out of the set of a Star Wars movie itself.

The impressive new opening, named Star Wars: Galaxy’s Edge will be spread across a staggering 14 acres, and is set to be completed on August 29.

Since there are less than four months until its long-awaited completion date, stunning aerial photos of the park have started to emerge on social media.

And they’re here to impress! We guarantee Star Wars fans won’t be disappointed with this new addition to Disney World, as it looks so realistic!

Take a scroll through the aerial shots at Disney World in Orlando, Florida below.

Star Wars: Galaxy’s Edge is in its last stages of construction, and we’re so excited!

Check out the Millennium Falcon under construction—fans of the beloved films are sure to be impressed.

If you compare the size of the car park here with the amusement park, that’s when you know things are serious.

If you get hungry in between rides, there are several restaurants here for you to regain your energy, including Oga’s Cantina and Ronto Roasters.

You’d better prepare your coins, though, as Disney World increased their admission prices in January.

A visit during the holidays or weekends will set you back $149 for a day, while off-peak times such as weekdays or less busy months will cost $104 for a day.

If the Orlando theme park is a bit too far away from you, fear not, as an almost identical Star Wars land is opening in Anaheim, California’s Disneyland next month.

Will you be going? Let us know in the comments!

Take a look at exciting behind the scenes footage from Disney Parks:

This puzzle can be easily solved by any 6-year-olds but it...

Can you hear this GIF? If you said yes you’re like...