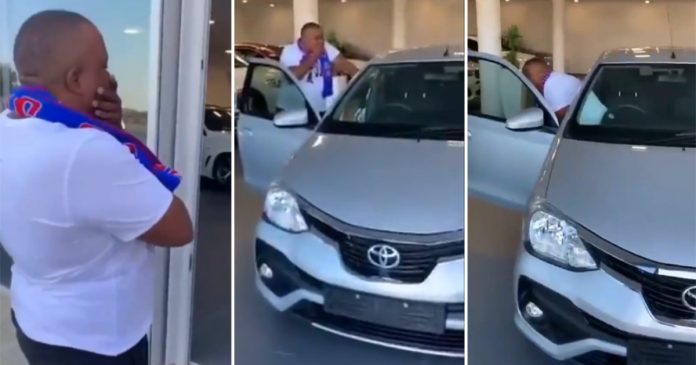 Tired of picking up their particular friend on a frequent basis, a group of men bought a brand new car especially for their friend who did not have a car on his own.

Having a car means it is easier to get anywhere else when public transportation is not frequent in your area but that also means you have to play chauffeur for your friends who do not have a car.

While it is not big a deal to do them favor once in a while, a group of friends had a different story when one of them frequently asked for their help to pick him up because he did not have a car.

That was when they decided to make things easier for everyone and bought their friend a new car!

Twitter user Asanda_Goduka shared a heartwarming video where he and his friends decided to surprise their friend who used to rely a lot on them to pick him up or send him home.

These guys bought their friend a car cause they are tired of picking him up??❤️ such brotherhood ❤️❤️❤️God bless this friendship ?? pic.twitter.com/Csm8XMirJi

In the surprise video which has since caught thousands of netizens’ attention, they surprised their friend with his new car at a car showroom.

Needless to say, their friend was beyond ecstatic upon seeing his new car!

In the video, one man can be heard saying, “That’s your car man” before the lucky man replied, “What do you mean that’s my car?”

Apparently, the lucky man was speechless when he realized that his friends were actually telling him the truth although they later made a ‘fair’ trade that the man had to buy breakfast for all of them for the next two weeks.

Even though they pointed out that they were “tired of picking him up”, it is truly heartwarming to see how they have each other’s back and help their friend out at the time when he needed it the most!