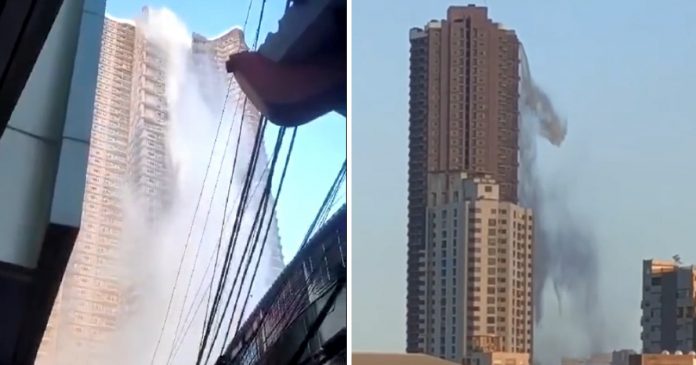 A 6.1 magnitude earthquake which occurred in Manila recently on April 22 not only caused a panic among the locals and sent building shaking violently but also water to spill from a penthouse pool.

The earthquake hit several provinces and cities in the Philippines including Zambales, Pampanga, Bulacan, Cavite, and Baguio City.

The powerful 6.1 magnitude earthquake swayed tall buildings in the business district in Manila including the luxurious apartment complex Anchor Skysuites.

Several footages captured water spilled from the penthouse unit of the apartment complex as the building began to sway during the earthquake.

Anchor Skysuites is the tallest building in the Chinatown district of Manila and is also one of the tallest in the country as it stands at 181 meters tall.

Due to the quake that hit the city, water from the pool believed to be from the penthouse unit of the apartment was sent gushing down from the top floor.

Another footage also managed to capture the terrifying moment water spilled from the top floor when a 48-storey corporate tower Net Park swinging.

My officemate sent me this vid of NetPark in BGC and this is where our office is located #EarthquakeManila Stay safe everyone! pic.twitter.com/I3fJcnUMPJ

Employees can be seen panicking when they witness a large spill of the water cascade over the side of the building in footage which has since gone viral on social media.

This was insane ? here’s a look from the inside of NetPark 37th floor. pic.twitter.com/MlK5RntlRk

According to a statement released by the Net Group, “an external fiberglass roofdeck water tank provided by a professional third party at Net Park ruptured,” as reported by ABS-CBN News.

The earthquake was centered in the town of Castillejos, about 62 miles northwest of Manila.

In case of an earthquake, it is advised to take a cover under a sturdy table if you are inside a room and stay until the shaking stops and it is safe to go out. Do not go near heavy furniture like bookshelves as they may fall and hit you.

If you are swimming in a pool, it is best to stay away from the pool ends and sides until the quake stops completely. Make sure the waves have subsided before you get out of the pool.