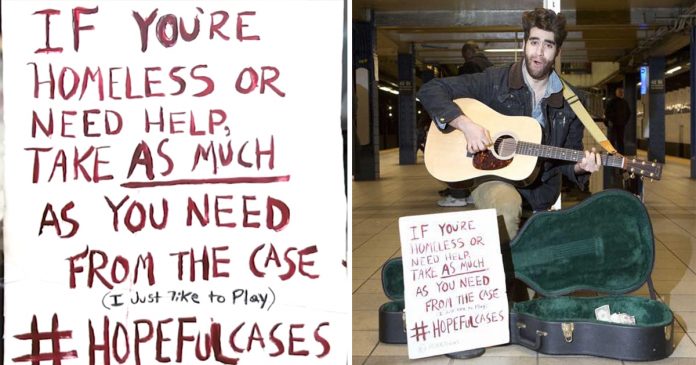 It is not hard to find street performers busking on the streets or underground subways.

All street performers have their own reason to perform. While many earn their living through sincere donations passersby made, they may have reasons such as raising funds for tuition fees or just to get some experience playing in the public.

However, New York street performer, Will Boyjian has a completely unique reason to play his guitar in the subway.

Every day, he packs up his guitar and microphone to the subway and plays rock ‘n’ roll songs on the platform. Next to him is his guitar bag case wide opened ready for those who are kind enough to leave some money.

But, the money is not for himself.

Rather, all of the money he collects every day goes to the homeless people around New York City.

“So basically I go into the subway and I play ’50s rock ‘n’ roll songs on the platform. People donate money. I leave my case open. I have a sign that says if you’re homeless or in need, you can take as much as you want,” Boyajian told Salon.

“People donate and throughout the day, people will come up and take money out. I try to end with zero dollars at the end of the day.”

“We all thought, myself included, my friends who knew about this, when we started this project, that the money would go all at once, that it would fill up and someone would come to take it all,” he added.

Even though he often makes it clear to the homeless who are interested to just take all of the money, they often only take as much as they need to sustain for the day, keeping in mind that others may need it as well.

According to Epoch Times, he usually spends four hours a day busking and raises up to $400 a day. All of the money goes to the charity project.

Boyajian hopes to have more volunteers in every subway station throughout New York City to help reach more people in need.

Today, the project is still ongoing after two years and he even manages to get more people to join his effort.

Watch the video of Boyajian busking for charity and touching comments he receives here.

Uncle pulls out mystery letter during wedding—bride gasps when she realizes...