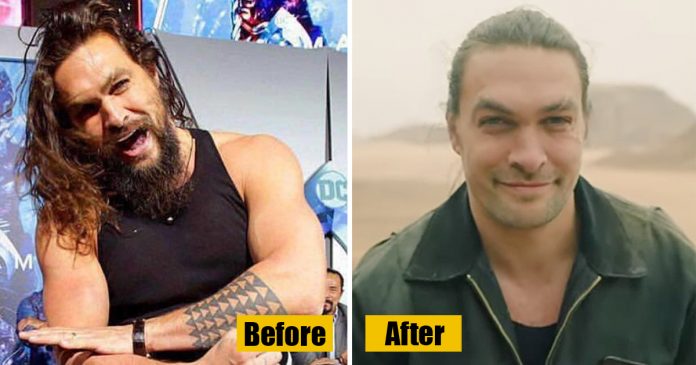 Millions of fans worldwide are losing it after Jason Momoa revealed that he had shaved off his iconic beard and appeared with his new clean-shaven look in a YouTube video.

With an electric razor, the famous Hollywood actor shaved off his long beard unapologetically in a place appears to be a remote desert.

While it may seem as if he was preparing for another role in a soon-to-be blockbuster movie, Momoa actually has a solid reason why he shaved off his beard and it is far from glamorous.

“I just want to do this to bring awareness that plastics are ruining our planet, and I think I have a solution,” he said.

“I don’t want to bitch about it. There’s only one thing that can really help our planet and save our planet as long as we recycle, and that’s aluminum. It’s 100 percent recyclable.”

Apparently, his interest to join in the mission of saving the world from plastic pollution what drove him to pick up the electric razor.

“I’m shaving this beast off, it’s time to make a change,” Momoa continued.

“Let’s clean up our oceans, our land. Join me on this journey. Let’s make the switch to infinitely recyclable aluminum.”

Even though Momoa had an incredible reason to shave his beard, his fans were divided as the majority of them felt “distraught” after the star changed his iconic look.

Some even went to say that they felt hopeless after Momoa’s shaved off his beard.

jason momoa just shaved his beard off and now nothing makes sense in this world pic.twitter.com/02OMMttsIS

Many others were obviously left brokenhearted.

Jason Momoa shaving his beard has broken my heart

However, there were people who supported Momoa’s decision.

"Good bye, Drogo," Jason Momoa exclaimed while he shaved his beard off for a cause that is to help save and clean mother earth. Such a wonderful, wonderful human being ?? pic.twitter.com/gFbqsuPySY

Like this Twitter user who agrees that Momoa is a great person with or without his beard!

beard or no beard, it doesn't change the fact that jason momoa is a fantastic human being. https://t.co/COswaT8AI0

Whether or not you like his new look, Momoa shaved his beard for a good cause and to encourage others to recycle plastics so kudos to Momoa for that!

Watch this video of Momoa shaving his beard here