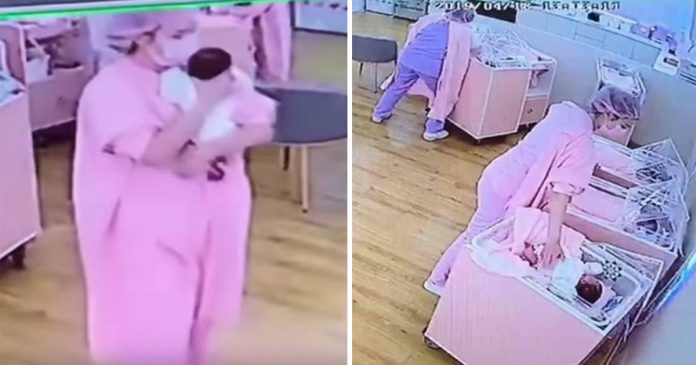 Touching footage from a surveillance camera shows selfless nurses at a home-based confinement center in Taiwan protecting the newborns under their care with their bodies during a 6.1 magnitude earthquake.

In the footage which has since made rounds on Taiwan’s internet, it begins when the center is shaking badly as several cribs of where some of the newborns are sleeping inside rolled around the room.

One of the nurses then quickly grabs two cots near her while she crouches to calm the babies.

The footage also shows two other nurses who are cuddling a newborn baby each in their arms quickly attends the other babies who are apparently shocked by the sudden shaking.

The nurses also appear to use their bodies to protect the newborn babies in case of any falling debris from the roof.

In the time when danger awaits them, the nurses choose to stay by the helpless babies’ side and comfort them instead of rushing to their own safety.

Thankfully, none of the nurses and the newborns was injured when the earthquake took place.

When the footage went viral on the internet, many people were impressed by the nurses’ selfless and noble actions to protect and comfort the babies during the earthquake.

17 people were injured after the largest earthquake that has hit the country this year.

Watch the heartwarming moment the nurses protect and comfort the newborn during the earthquake here.