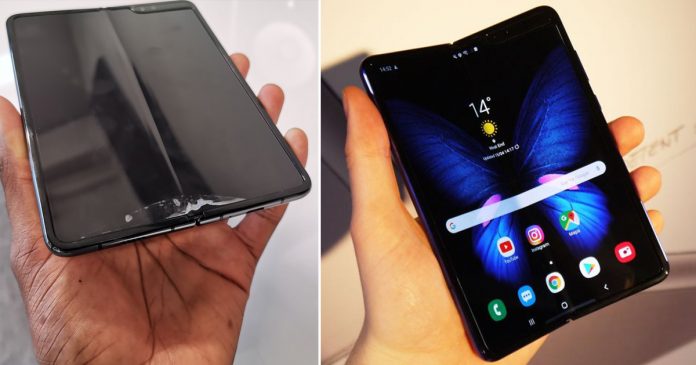 When Samsung announced their latest venture, the new Samsung Galaxy Fold last February, many people were impressed by the incredibly cool feature but apparently, not everyone was into it.

The Galaxy Fold comes with a 7.3-inch display and can be folded in the middle of the screen as its main selling point.

However, some journalists who were given early access to test out the phone found the device to be having problems that were hard to miss.

Mark Gurman from Bloomberg posted on his Twitter account that his phone was “completely broken” within two days.

The screen on my Galaxy Fold review unit is completely broken and unusable just two days in. Hard to know if this is widespread or not. pic.twitter.com/G0OHj3DQHw

Nevertheless, Gurman revealed that he actually removed a protective layer which he was not supposed to. According to him, he initially thought that the layer was just a film to keep the screen looking nice pre-purchased.

The phone comes with this protective layer/film. Samsung says you are not supposed to remove it. I removed it, not knowing you’re not supposed to (consumers won’t know either). It appeared removable in the left corner, so I took it off. I believe this contributed to the problem. pic.twitter.com/fU646D2zpY

Apparently, he was not the only who thought that the film was meant to be removed.

Youtube user Marques Brownlee also encountered the same problem when he took the film off the screen.

I got this far peeling it off before the display spazzed and blacked out. Started over with a replacement. pic.twitter.com/ZhEG2Bqulr

The Twitter posts from confused users of the new Samsung Galaxy Fold later prompted a user to remind future owners not to remove the protective film.

Dear future #GalaxyFold owners, I know I always say "No one ever read the instructions"… PLEASE READ THIS ONE!!!

(This is the wrap over the screen of the Galaxy Fold) pic.twitter.com/LuQPRfDZIE

However, some journalists complained that the device broke even when they did not remove the protective film including the executive editor of technology news site The Verge, Dieter Bohn.

My colleague opened the Galaxy Fold and it started doing this. So, long answer to your question @WilfredFrost, the hinge doesn’t seem very rugged after all. After two days: pic.twitter.com/Z1F8iwjURa

Following the issues, Samsung said that they would ‘thoroughly inspect’ all the issues with the phone.

“A limited number of early Galaxy Fold samples were provided to media for review. We have received a few reports regarding the main display on the samples provided. We will thoroughly inspect these units in person to determine the cause of the matter.

They also added that they would ensure future users to be aware of the fact that they should not remove the protective film.

“Separately, a few reviewers reported having removed the top layer of the display causing damage to the screen. The main display on the Galaxy Fold features a top protective layer, which is part of the display structure designed to protect the screen from unintended scratches. Removing the protective layer or adding adhesives to the main display may cause damage. We will ensure this information is clearly delivered to our customers.”

The new Samsung Galaxy Fold will be on sale in the United States starting April 26.