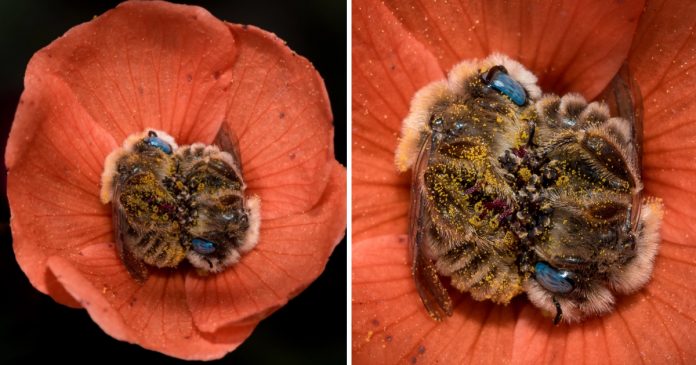 While it is common to see bees buzzing outside their beehives during the day, not many get to see how they sleep and snuggle at night behind the flowers’ petals.

Luckily, wildlife photographer Joe Neely managed to capture two bees sleeping in a flower and it will be the cutest thing you will ever see this week!

In an interview with Bored Panda, Neely told that it was not his intention at first to capture the rare sight with his camera. At first, he went out with his fiancé Niccole to find flowers.

“The story behind this photos [begins when] me and my fiancé Niccole went out to find poppy flowers,” Neely said.

“On the way back we saw this patch of pink flowers just off the highway so we stopped to take some photos.”

“Niccole was shooting over this since orange Globe Mallow plant that was hidden inside all of these pink flowers and she heard the bees buzzing about,” the Phoenix-based photographer said.

It was at that time that Niccole noticed some of the flowers had bees in them but they were not moving.

“I came over and study it for a while and more bees showed up. Soon, all the vacant flowers were occupied and this one bee was left out.  She crawled over to this open flower and got inside with the other one. I was watching as he stumbled around almost drunk-like and then got settled in.”

According to Neely, he later learned that bees actually sleep in flowers and the bees they were observing, the globe mallow bee, sleep in orange flowers called globe mallows.

The globe mallow bees are responsible for the reproduction of globe mallow flowers so it makes sense that they will try to catch some sleep in their favorite flowers.

Even though bees sleep like the rest of the animals, they do not sleep with their eyes closed.

“They don’t have eyelids, so you can’t just look for bees with their eyes closed,” said Brandon Hopkins, a bee researcher at Washington State University.

“By carefully watching bees, scientists have found that honey bees stop moving their antenna and in some cases fall over sideways,” Hopkins added.

While globe mallow bees sleep in a flower, other bee species like honey bees sleep inside their hives and take shifts to sleep.

All thanks to Joe, we now know that bees need their beauty sleep too. Head out to his site for more amazing nature photography works.