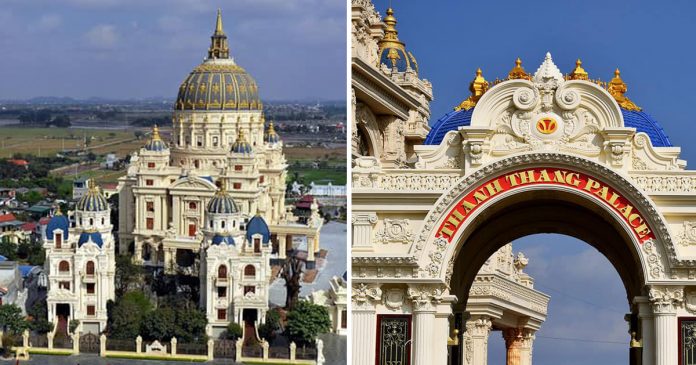 Complete with an opulent facade, gilded roof, and decorated walls, this majestic European-style palace may look like it belongs in a fancy neighborhood somewhere in Europe but believe or not, it is actually located in the middle of Vietnam’s rural district.

Known as Thanh Thang Palace, the palace is actually the residence of a local billionaire who reportedly built the lavish building to fulfill his dream of living in a palace.

The palace is located in the heart of Gia Vien in Vietnam’s Ninh Binh province and cost between $12 to $17 million to build.

Even though it is still under construction as the interior has not yet been completed, the locals get to catch a glimpse of the stunning place through its completed exterior and needless to say, the palace looks luxurious and impressive.

For the last few weeks, photos of the palace have been circulating on social media as thousands of people are stunned to see the architectural wonder from the neighborhood.

From the intricate gilded dome to the grand arch that will instantly amaze the visitors when they enter the residence, the palace is truly fit for its owner, Do Van Tien, a 52-year-old Vietnamese businessman.

The billionaire businessman actually named the palace after his two sons, Thanh and Thang.

It was estimated that 1,000 tons of iron, 4,000-5,000 tons of cement and tens of thousands of tons of sand and bricks were used to build the splendid residence.

While the houses around the palace stand at most 2-story high, the palace boasts 6 storeys and covers an area of 1,700 square meters.

It also has a huge underground floor that is split into three areas — a garage as big as 700 square meters to accommodate up to 30 cars, another smaller garage that can accommodate 20 cars at a time with its 500 square meters area, and a music room which comes complete with a stage.

Meanwhile, the two smaller buildings which are located next to the main building are meant to symbolize the two sons.

According to local newspapers, the two smaller palaces show Do Van Tien’s hope to see his two sons to always rely on each other and work together for their family business.

At the moment, Thanh Thang Palace is considered as the grandest and the most luxurious residence in Ninh Binh province and may continue to hold the record for many years to come.

Watch how impressive the palace can be at night here