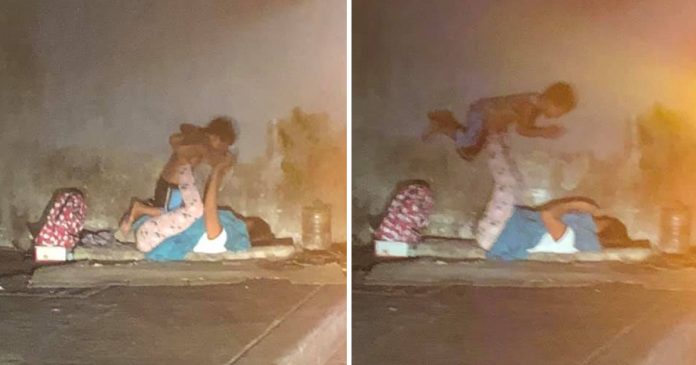 As commuters were leaving from work and complained about getting caught in heavy traffic in Parañaque, the Philippines, they never expected to see an eye-opening scene.

There under what looked like a flyover, a woman who appeared to be homeless laid on a mattress and played with her son as cars passed by them.

The heartwarming scene apparently caught the attention of one of the commuters, Ameniel Del Mundo when he was passing the street.

Moved by what he saw on his way back home from work, Ameniel later posted a photo of the mother and her son on Facebook.

It did not take long before the photo gained thousands of other users as it quickly amassed 21,000 shares as of the time of the writing.

Proof that happiness is a choice. ?Edit: This mother and her son were found playing in the middle of heavy traffic at…

“Amidst poverty and without any material things, the mother and her son remained happy and content and could be seen playing around,” Ameniel wrote in his post.
In his interview with INQUIRER, he told that he saw the mother and the son playing happily in the midst of heavy traffic while he was grumbling about his day in his car.It instantly reminded him how lucky he was compared to the homeless duo but apparently was not as grateful and happy as the two were.

“We cannot choose the circumstances that happen to us, but we can choose to be happy whatever the situation is. That is why happiness is always a choice,” the man wrote in another Facebook post.

Many people also shared their comments about the cheerful mother and son despite their living situation.

One user commented, “Proof that happiness is being with the people you love and not just having the material things in life,” while another user wrote, “They make do of what they have..they are happy for a moment..”

However, some users criticized the post as they pointed out that the unfortunate situation the mother and the son currently live in should not be romanticized.

“Only those who are privileged and rich would label this as being happy and contented,” one netizen commented.

When Ameniel returned to the spot where the duo was previously seen days later, they were no longer there.
“For those who wanted to help, we are still looking for them since yesterday, as we can’t find the family,” he updated on Facebook.

“Will update as soon as we find them,” he added.