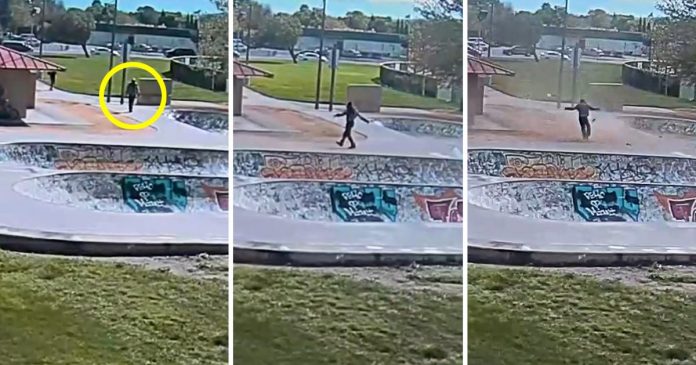 A surveillance camera captured the terrifying moment a powerful “dust devil” in the Solano County city of Fairfield ripped part of the roof of a building and spun a man with its strong vortex.

In the footage which was captured on Tuesday, April 9 in Alan Witt Park, the man took the opportunity to stand in the middle of the mini tornado and later is seen spun the whirlwind gets stronger.

Meanwhile, the “dust devil” ripped a part of the roof of a nearby building and caused debris flying everywhere, as reported by ABC7 News.

The video also captured what appeared to be skateboards being picked up by the howling whirlwind and sent them across the pavement. 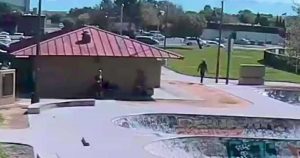 Fortunately, the man and everyone else in the park was not injured.

The video of the man being spun by the “dust devil” instantly spread on the internet like wildfire as it has amassed over 61,000 views and attracted comments from users who were surprised.

“He’s lucky he didn’t get hit by the debris. The weird thing about dust devils is the vortex usually comes out of nowhere. I lived in the Mojave Desert as a kid and we used to get them all the time!” one user commented.

According to the American Meteorological Society, dust devils are small but powerful whirlwinds which usually occur for a short duration.

However, the whirlwind is strong enough to rip apart roofs and cause minor damage.

Dust devils can range from 10 to 100 feet in diameter with an average height of 650 feet.

They usually occur when the condition is dry, clear and hot, according to the National Weather Service.