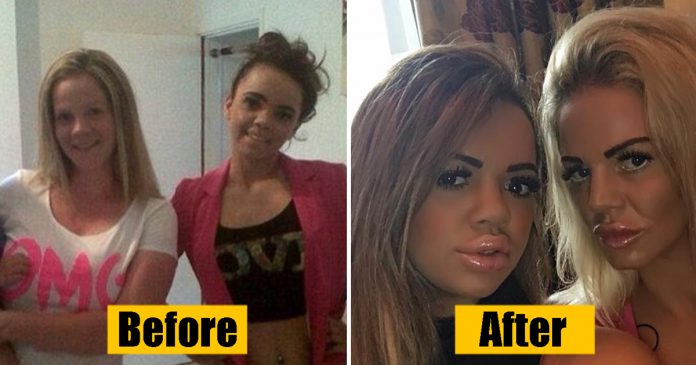 While most mothers and their 11-year-old daughters play games and watch kids’ movies together, this duo had something else on their mind.

Georgina Clarke, 38, and her daughter Kayla Morris, 20 won’t stop until they look like British model and reality star Katie Price.

So far, they’ve spent a whopping $86,000 on plastic surgery over the past three years to achieve their dream look—and they’re not even done there!

It all began when Kayla was just 11. She was watching a TV show with her mom about the British model who is well known for her breast enhancement surgeries.

The pair thought she had “the whole package” and wanted to look just like her.

“When I was 11 and watching Katie Price, I knew I wanted a boob job and wanted to look like her.

And although most moms might be against the idea of their children going under the knife, her mom said she’s happy because she wanted her daughter to be into plastic surgery when she was older!

“I was pleased Kayla wanted surgery and wanted a boob job. I was glad because I wanted her to be, like, that kind of person,” Georgina admitted.

So over the past three years, the pair have had countless numbers of treatments, including botox, lip injections, breast implants, cheek fillers, teeth whitening, hair extensions and semi-permanent makeup, according to News Dog Media.

And it’s all been funded by Kayla’s “sugar daddy” who she met when she started stripping aged 17.

“I don’t mind Kayla having a sugar daddy or stripping to pay for surgery, because we’re living the dream,” her mom said.

They still want more done, and are looking into getting another breast implant and a butt lift.

Plastic surgeon Dr. Anthony Youn said instead of getting more surgery, he thinks Kayla’s mom should encourage her to be happy the way she is.

“I strongly believe that the most appropriate [approach] to plastic surgery is to do the least amount necessary to make a person happy.

“That’s what I encourage of my patients, and what this mother should be encouraging of her daughter,” he said.

Whatever makes them happy!