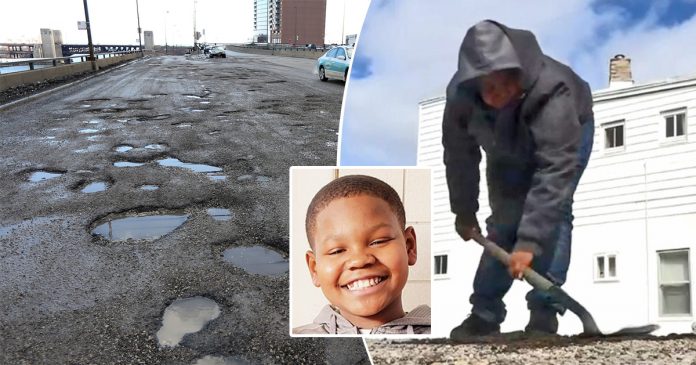 Every year after winter season ends, thousands of streets in America are left with dangerous potholes that this 12-year-old decided to take matters into his own hands.

It began after Monte Scott was tired of waiting for the authorities to show up and fix the potholes in his neighborhood area on Maffett Street in Muskegon Heights, Michigan.

Streets in America are often left with gaping holes after winter season with holes that go as deep as to swallow a car tire.

Maffett Street was not an exception but by the time April came, the potholes were yet to be fixed by the authorities.

Monte then decided to repair the road by himself.

He then took a tall, blue garbage bin from his garage and filled it with dirt from his backyard.

Next, Monte dragged the bin all the way to the street and filled each pothole like a pro.

Monte’s mother, Trinell Renee Payne, who later found from a relative’s video that her son worked hard to fix the street then shared the video on Facebook.

“This is my son fixing the potholes on Maffett street in Muskegon Heights off of Summit,” Trinell wrote.

“He had a half day of school so he decided to fill the potholes because he doesn’t want his mom and grandma to mess up our cars. I love my son. He has a heart of gold.”

For Monte, he apparently had his own reasons for doing so.

“I didn’t want people messing up their cars like my mom did,” he explained. “If somebody were to drive down the street and hit a pothole, and then would have to pay like $600-700 to get their car fixed, they would be mad.”

Trinell hoped that the post could inspire other youths to contribute to the community.

“That’s just the type of kid he is. When he sees there’s a problem or a need, and he thinks he can fix it, he’ll try to fix it,” Trinell said.

Watch the video of Monte working hard to fill in each pothole here.

Bank staff called the police to remove an upset 92yo, but...