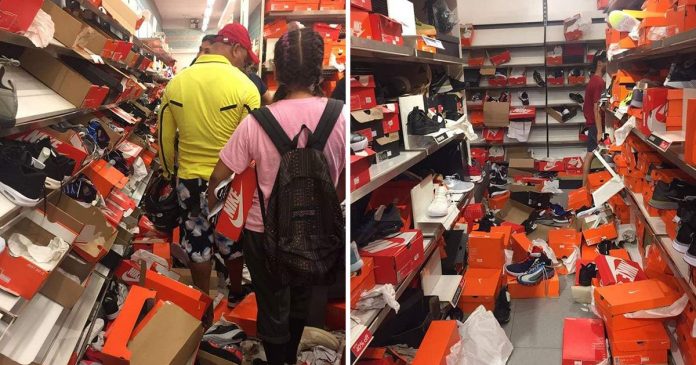 It is hard to contain one’s excitement when stores begin to offer huge discounts for their items but that does not mean anyone can turn the stores upside down and leave them in such a mess during a sale.

Recently, a viral post reveals the worst in excited shoppers as it shows several photos of the aftermath of a sale at a shoe store in the Philippines.

The shocking photos show boxes and dozens of shoes destroyed as the store’ employees squat on the floor to clean up the mess.

The post shared how all the boxes and shoes were arranged nicely on the display shelves before customers entered the store and took down the shoes.

After the disastrous shopping frenzy, shoe boxes were found torn apart and destroyed and sneakers were abandoned in a pile on the floor.

Even though the post did not reveal the exact location of the shoe store, it was implied that the store is located in the Philippines.

Auffie Anne Beatrice who shared the viral photos on her Facebook wrote, “Sorry. Filipinos are irresponsible and insensitive shoppers.”

“Imagine all the work and over time you have caused the employees when in fact these were all properly arranged and put in order for your own convenience.”

“Other shoppers were left to scavenge for the other pairs of their shoes as well as its boxes. While others waited and lined up only to leave the store empty-handed since “shopping” was almost made impossible due to the trail of shoes all over the floor and ripped boxes. Filipinos can give straight high blood pressure.”

She further wrote that the customers had left the shoe store in such a mess without even purchasing any of the shoes.

According to Auffie, she shared the post on her social media to remind Filipinos to keep their best attitude when going for shopping.

“The reason why I wanted to post it is because I wanted make Filipinos aware of how unruly they are when shopping, which is why I wouldn’t even compare the scene to Black Friday or Boxing Day.”