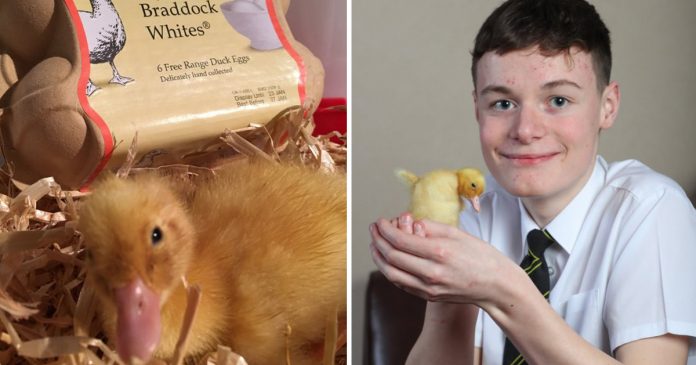 A 14-year-old teenage boy just claimed that he managed to hatch a duckling from a supermarket egg but how likely is it to happen?

According to William Atkins from England, he managed to do so just by using a £40 (US$52) incubator that he bought from eBay.

In a little experiment, the 14-year-old schoolboy wanted to test out whether or not it was impossible to hatch a duckling from a supermarket egg.

He then bought a carton of free-range duck eggs for the experiment.

Then, the boy placed all the eggs under the incubator in his room.

“Watching it develop over the next three weeks was fascinating. I was over the moon when it finally pecked its way out,” William told the Daily Mail.

He did not expect any of the eggs to hatch but three days later, he noticed a small heartbeat from one of the duck eggs.

He plans to name the duckling Jeremy or Jemima once he figured out the sex of the duckling.

The duckling will go on to live in a nearby farm when it is old enough.

Store-bought eggs are not supposed to be fertilized but according to an expert from egg company Clarence Court, it is not entirely impossible. However, the chances are “remarkably slim”.

“Ultimately, with an egg that has traveled from our farm to the home via our packing center, the supermarket depot, and store network, it is a feat of remarkably slim odds that a duckling has been hatched. But we acknowledge that it’s not impossible.”

Farms usually separate female ducks from male ducks to avoid mating and the eggs being fertilized.

However, the Clarence Court expert said that there may be male ducks among the females as separating them requires skills.

“Duck egg production is a very small industry, and the separation of males from females relies wholly upon the skill of very few qualified people – the sexer who examines the day-old duckling in the hatchery.

“Inevitably, the odd sexing error is made. Sexing is so much trickier than with commercial laying hens, for example, which can be separated clearly by the different colors of their down feathers.”

“So, whilst it is very unusual for males and females to come into contact with one another, it is not impossible,” the expert concluded.

Nevertheless, just in case you have been eating fertilized eggs all this while, it is completely fine.

“Fertilised eggs are completely harmless to eat and without incubation, would be totally indistinguishable from unfertilized eggs,” Clarence Court said.