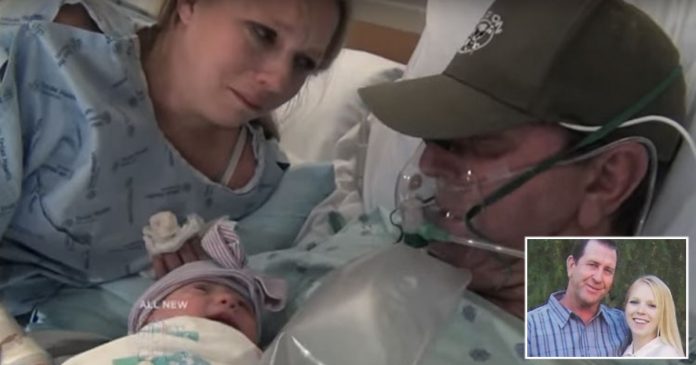 All Diane Augler wanted was for her dying husband to be able to meet their fifth child but when he had only less than a week left to live while she was not due until two weeks later, Diane decided to do something.

The 31-year-old mother of four was heavily pregnant with their fifth child and was due in two weeks.

However, when her husband, Mark, 52, had only five or six days left to live, Diane could not bear the thoughts that he would not be able to meet their youngest child forever.

Mark was diagnosed with pulmonary fibrosis and he underwent successful surgery to remove the cancerous growth on his colon previously.

Unfortunately, his lungs were left scarred from the chemotherapy, reducing the chance of him to survive.

Diane had originally planned to have natural childbirth but then Mark made a request that she could not say no to.

When they found out that Mark did not have much time left,  Diane decided to change her plan.

Not long after that, she gave birth to a beautiful baby girl in a hospital bed next to her husband’s.

Mark then got to hold their newborn baby, named Savannah, for 45 minutes before he slowly lost his strength.

While the day should be filled with happy tears and laughter, Mark cried and could only look at baby Savannah when his strength failed him.

Mark later slipped into a coma for three days after the day Savannah was born.

She remembers when she placed little Savannah on Mark’s chest when he was in a coma and Mark’s hands move towards his daughter as if he wanted to hold her for the last time.

On January 23, Mark passed away in his hospital bed with baby Savannah in his arms. “His heart rate started to drop and his breathing started to drop, so I put her in his arms and held his hand until he died,” Diane said.

Even though Mark’s days were numbered and he could only meet Savannah for a brief moment, Diane knew that he would always love Savannah.