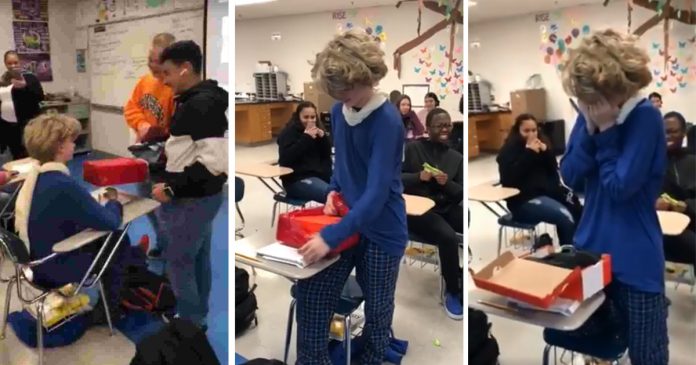 As a concerned classmate, Azie Robinson has always been the one who offers to help his classmates. Now, his classmates decided to return his favour in the most heartwarming way ever.

For the students at La Vergne High School, Azie is usually the one who always help others when they have a problem.

When Azie was the one who hit the rough patch recently, his fellow classmates did not hesitate to help him.

In a video captured by one of his classmates, Kerolos Girgis and another young man enter a classroom and approach Azie to present him a gift. Baffled by the sudden gesture, Azie then asks them.

The boys then explain that since Azie has been helping others in the classroom, it is time for them to return the favor.

Azie is surprised by the thoughtful gesture and proceeds to open the well-wrapped present. As the present gets unwrapped and reveals a box of shoes, Azie finds himself at a loss of words.

Turns out, the present is a brand new pair of Nike shoes!

Azie who is overwhelmed with emotions quickly burst into tears and soon, everyone in the classroom is in tears as well.

Apparently, Kerolos has purchased the pair of shoes with his own money after learning that Azie was going through a difficult time. The brand new shoes are only half of the present.

To show their support to both Kerolos and Azie, other students give Azie a stack of new clothes.

The video of the surprise heartwarming gift has quickly gone viral with over 358,000 views and 5,700 shares as many netizens were touched by the supportive classmates that Azie has.

As for Azie’s classmates, they never expected the video to go viral. When they decided to share it on social media, they just wanted to spread the love and to show support to their fellow classmate.

Lost boy ended hundreds of miles away from home. 25 years...