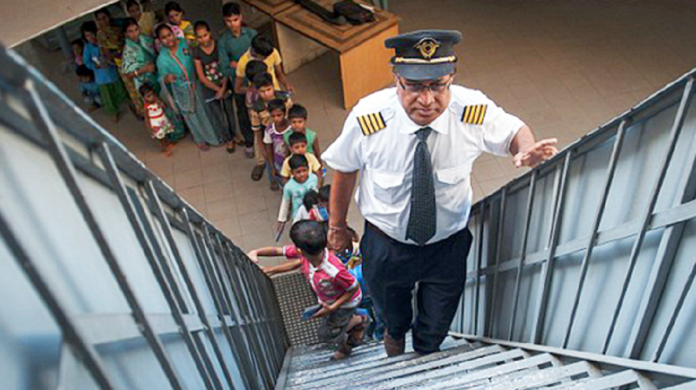 Low-cost carriers have seen increasing popularity among Indians in the past years but there is also a large part of the population in which boarding an airplane remain a far-fetched dream.

However, thanks to retired engineer Bahadur Chand Gupta, India’s poor population now gets to have the chance of boarding an airplane for free but there is one thing—the plane never takes off to any destination and stays on the ground.

The 58-year-old man worked for Indian Airlines as an engineer before he retired.

Coming from a small village in Haryana, there were not many people from his village who could afford to take a flight.

“I belong to a very small village in Haryana,” Gupta said. “When I was working, people from my village used to ask me about aircrafts.”

“Many of my friends in my villages used to ask if I could take them inside an airport so that they can see the aircraft from close quarters as they could not afford to travel in an Airbus.”

His intention has been only one—to give the poor people in India the chance to board an aircraft, something that most of them could only dream of.

Parked in New Delhi, the out-of-service Airbus 300 is often visited by mostly children and those who are excited to have an experience of boarding a plane.

Even though the aircraft never operates, the visitors are still given tickets in the form of a ‘boarding pass’.

They are even treated to complimentary sweets by the aircraft’s ‘flight attendants’.

According to Gupta, visitors who came from the lower class can board for free while those who are from the middle class are charged US$1.

He also gives a demonstration on how to handle an aircraft and how to evacuate the airplane in case of an emergency including exiting the airplane by using a functioning slide.

“I train people for the emergencies. We teach them how to save lives in case of fire and how to jump from the aircraft,” Gupta said.

Thanks to his creative idea, many of those who cannot afford to buy a flight ticket now get the chance to see how an airplane looks like at least once in their lifetimes.