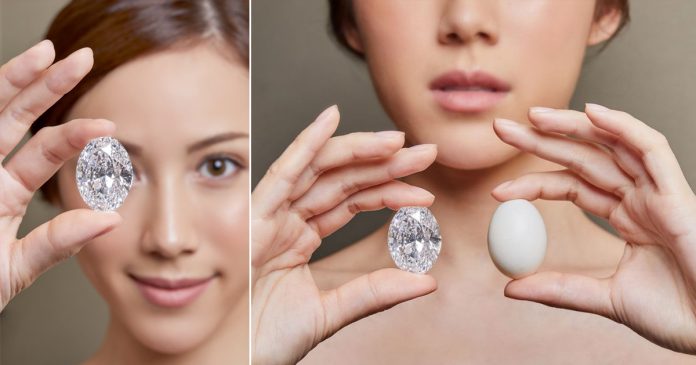 A Japanese dad has just spent $13.8 million (HK$108 million) on a rare 88.2-carat oval diamond for his daughter, at Sotheby’s Asia this week.

#AuctionUpdate: Spectacular 88.22-Carat Oval Diamond, perfect according to every critical criterion, sells for HK$108 million / US$13.8 million, to a Japanese private collector who names the stone the 'manami star' #SothebysJewels pic.twitter.com/ekKqsoEb33

The huge D colour, flawless, type IIa, oval brilliant diamond is reportedly the biggest diamond to be auctioned in over five years, and three people were bidding for it.

The dad who won it was super sweet and named the diamond ‘Manami Star’ after his beloved eldest daughter.

“This lucky stone now carries the name of the fortunate child whose father has chosen to give it her name. A happy moment in the journey of one of the earth’s greatest, oldest treasures,” Sotheby’s Asia chairman, Patti Wong said.

He won the flawless stone, which has no imperfections, at Hong Kong Sale of Magnificent Jewels and Jadeite.

The type IIa is particularly special as it means it contains little or no nitrogen atoms, making it part of one of the rarest diamond subgroups.

A rare 88.22-carat oval diamond was just sold at auction at Sotheby's in Hong Kong for over $11 million https://t.co/tFLvVo11Yw pic.twitter.com/lG2NnMWcqw

“The spectacular 88.22 carat diamond auctioned at Sotheby’s is one of the largest and most well cut D-flawless oval cut diamonds ever offered for sale,” said Eddie LeVian, CEO of celebrity jeweler Le Vian.

“Considering the limited supply of high quality diamonds, some miners are digging deeper for diamonds and this is only economically feasible when diamond prices are rising,” he added.

The special diamond was cut and polished from a 242-carat rough stone found in the Jwaneng mine in Botswana, where nearly 40 percent of the world’s rough supply diamonds are sourced.

Another large top-quality colourless diamond made the headlines: a type IIa 88.22 ct D-Flawless oval brilliant diamond was bought at Sotheby’s Hong Kong by a Japanese private collector that payed $13.8 million for the gem and named it “Manami Star” diamon…https://t.co/TqUd581ViQ

Head to Sotheby's Hong Kong auction to put a bid on this 88.22 carat D-Flawless diamond. Bring your checkbook because it's expected to sell for $12M. pic.twitter.com/BNp6Eri7qH

The Japanese father bid for 10 minutes to make sure he was the owner of the rare gem!

His daughter is certainly one lucky girl!