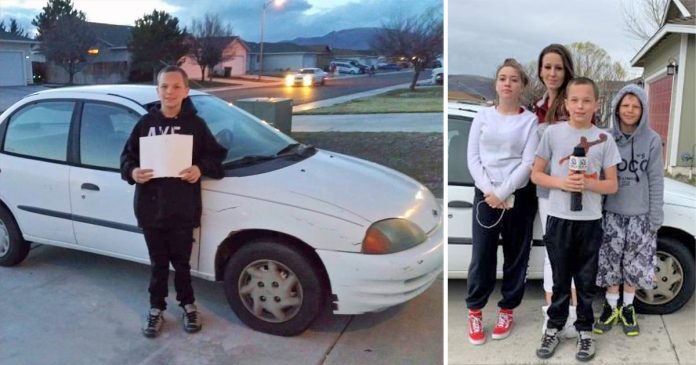 Most 13-year-olds would never trade their Xbox for anything else but this teenage boy from Nevada would do anything to surprise his mother with a car.

William Preston, from Fernley, Nevada grew up seeing his mother, Krystal Preston struggling most of the times just to support their family of four and their three dogs.

Having no means of transportation made it even tougher for Krystal as a single mother and the sole breadwinner of the family.

After watching a video on YouTube about a child surprising his mother with a new car, William later was inspired and determined to do the same.

“I saw on YouTube where people get their mom a car and then surprise her with it,” William told KOLO.“I wanted to do that.”

The young boy then saw an advertisement of a 1999 white Chevrolet Metro for sale on Facebook at such a low price.

He then contacted the owner of the car and asked her if he could do household chores or trade anything in exchange for the car.

“It was really cheap so I asked her if I could trade it or earn it, and at first she said no and after she thought about it, then she said yes,” he said.

William did not hesitate before he traded his Xbox and worked off to pay the balance.

When the teenager brought the car home and presented it to Krystal, the mother was at loss for words.

Prior to the surprise, William asked her about random car parts but she never thought he was planning to surprise her with a car.

“I can’t even express it, like there are no words that can express my gratitude and how proud I am.”

“At my low point, here comes my son,” the mother of three said.

“Everybody goes through rough patches in their life, but there’s good that can come from any situation as long as somebody with a heart does it.”

“I am so proud of my son. He is such a good kid. He may have his days but OMG what 13-year-old kid do you know that buys his mom a car… William I love you son and thank you. You have such a big heart and I love you,” she wrote in the post.