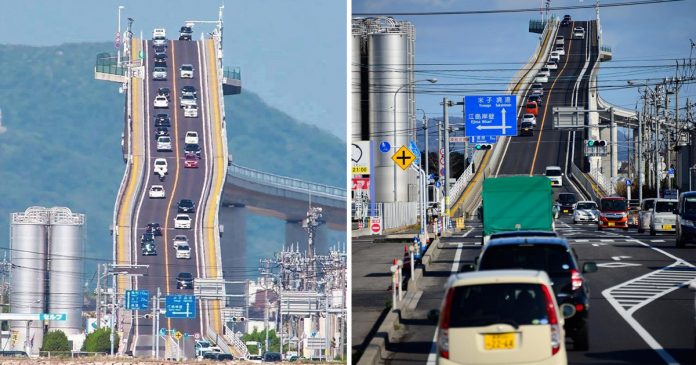 A bridge in Japan is so terrifyingly steep it’s giving even the most experienced of drivers have to think twice before driving across.

The Eshima Ohashi bridge located in Sakaiminato, Japan looks so steep, it’s even been dubbed the “Rollercoaster Bridge”.

The bridge has a heart-stopping incline of 6.1 percent, which is enough to put us on edge just thinking about it!

Eshima Ohashi links Matsue in the Shimane Prefecture to Sakaiminato in the Tottori Prefecture over Nakaumi Lake.

Its special architecture was necessary as the lake is extremely busy. Its steep incline ensures boats and ships can pass by under the bridge without delay!

Ships can pass by underneath without causing any disturbance.

When you approach it head on, it almost looks vertical. Eek!

Surprisingly, there haven’t been any accidents reported on the Eshima Ohashi bridge.

It’s supposed to be extremely safe for any vehicle to cross, according to authorities.

Eshima Ohashi is apparently the third largest rigid-frame bridge in the world and the largest in Japan!

Tourists from all over flock to see the unique bridge so they can tell their friends they took the adventure on.

If you’re up for an exhilarating trip akin to going on a rollercoaster, maybe this is one for you.

Would you be brave enough to take it on? Let us know in the comments.