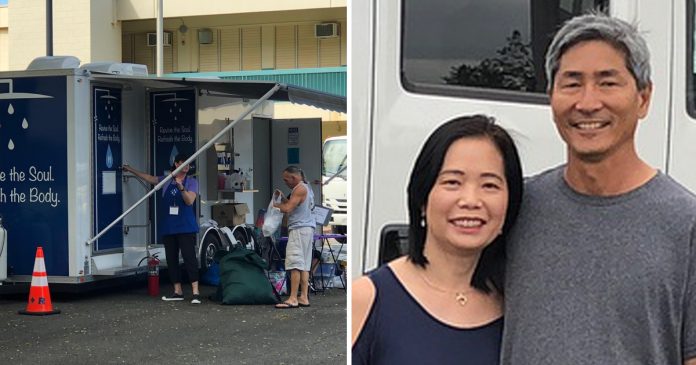 A hot shower is something that many people enjoy everyday but apparently to the homeless community in Honolulu, it is a luxury that they can only dream of.

Thanks to Craig Shoji and his wife Danica, taking a shower is no longer impossible for them.

This couple is helping the homeless people in Honolulu to “feel like humans again” with their mobile shower service.

It began when the couple visited San Francisco’s Tenderloin neighborhood, an underprivileged community where they met several homeless people.

“I was walking down the street and there was a houseless individual there,” Craig told Good Morning America.

“I just told him, “Good morning” and he was kind of surprised that I said that to him because no one ever says anything to him.”

Inspired by their visit to the community, Craig and Danica realised how uncommon it was for the homeless people in the area to get treated like other normal people.

For that reason, they later started a business, Laundry Love, where they provide fresh clothes for the homeless people.

The business received a positive response that it later expanded to providing hot meals and showers.

On their off days, the couple takes their trailer around Honolulu as they stop at multiple locations for the homeless people to take a shower.

So far, their business service has benefited 460 people with 250 people being able to take a shower at the facilities.

Each person who uses the shower facility gets 15 minutes. Each stall is provided with toilet paper, shower gel and hand gel. After taking a bath, they will be provided with a hot meal.

“Just to see their faces when they come out, it’s like a different person,” Craig said.