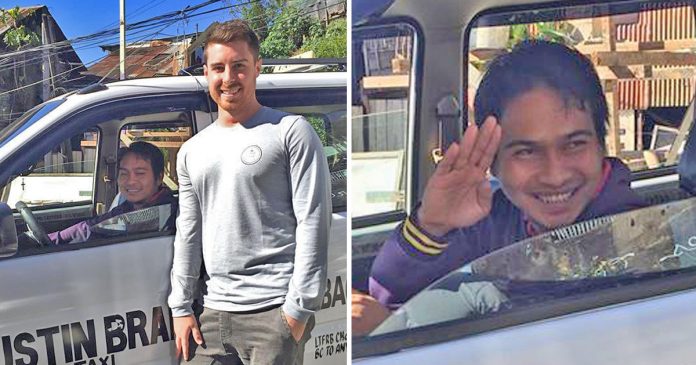 Can you recall the times when you accidentally left something valuable in the public and got frustrated because someone else had taken it?

Just in case if you are in such an unfortunate situation while in Baguio, Philippines you can rest assured that you will get your valuables back at the end of the day if you meet someone as honest as this taxi driver.

The Filipino taxi driver had all the chances to just take his passenger’s belonging and acted like nothing happened.

However, he did not yield to the temptations and decided to do what he was supposed to do.

Reggie Cabututan who works as a taxi driver received an Australian passenger who visited Baguio for business purposes. However, as he rushed to get to the destination, the Australian man then accidentally left his luggage in Cabututan’s taxi.

It was after Cabututan dropped him off at Calle Uno, Quezon Hill in Baguio City that he realised the Australian passenger named Trent forgot his luggage.

Apparently, the luggage contained many valuable documents, gadgets and personal belongings of Trent, worth around 1 million Philippine Peso (US$18,991).

Trent and his friend were on their way to the local police station to file a report about his lost luggage when suddenly Cabututan went back to the place where he dropped him off to return the luggage.

Thanks to his honesty and genuine conduct, Cabututan was later awarded a full scholarship worth 220,200 Philippine Peso (US$4,181) at Vivixx Academy, an Australian-based coding training centre.

DUSTIN THE WIN. How often have we read about taxi drivers in Baguio doing an honest deed and returning valuables to…

After Cabututan finished his 6-month long coding training, he is guaranteed an internship in an Australian company and a job with starting salary of 1.7 million Philippine Peso (US$32,285) a year.

Guess it is true that good things will happen to those who do good to others, just like what happened to Cabututan!