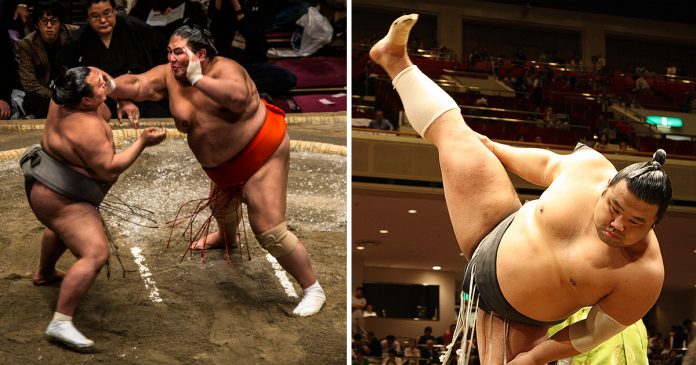 Eating up to 7,000 calories and weighing more than 300 pounds are not exactly what most people have in mind about living a healthy lifestyle.

Then, why do not sumo wrestlers who usually consume close to 10,000 calories per day and weigh between 300 to 400 pounds suffer from heart attacks, diabetes, stroke or any obesity-related diseases?

While a typical sumo wrestler weighs two or three times heavier than an average adult, they may be healthier than most people thanks to their high level of exercise they do on a daily basis.

Typically, people with obesity store a large amount of visceral fat which is fat that is stored around the abdominal area. Visceral fat is often the culprit of many diseases as it wraps around many vital organs in the body such as pancreas, liver and intestines.

Visceral fat can cause inflammation which further leads to health issues like high blood pressure, Type 2 diabetes and heart attack.

If this is the case, should not all sumo wrestlers suffer from obesity-related diseases?

According to Insider, a series of CT scans revealed that sumo wrestlers do not have much visceral fat at all. In fact, most of their fat is subcutaneous fat which is normally harmless and may help protect against many illnesses.

As opposed to popular assumption, sumo wrestlers often have normal levels of triglycerides and low levels of cholesterol which help them protected from heart attack and stroke.

A typical day for a sumo wrestler can begin as early as 5 am where they will start training before sunrise and keep training for five hours straight.

However, there is also a downside to living a lifestyle like this. As they stop doing intense exercises, so does the benefits.

When a sumo wrestler retires, they will have to cut down their calories intake. Otherwise, they will be at high risk of getting cardiovascular diseases.

That explains why retired sumo wrestlers in Japan pass away an estimated 10 years younger than average adults.

While the thought of eating 7,000 calories per day may appeal to many of us, you will also have to do intense and grueling exercises every day just to burn the calories.

Unless you are prepared to do exercise for five hours straight per day, you probably should not eat these much calories.