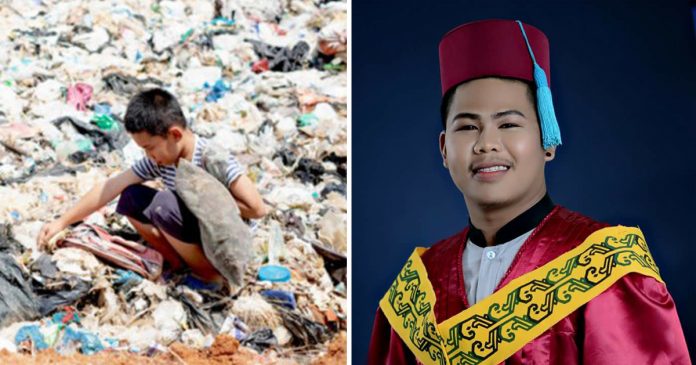 Jeb Bayawon, a former scavenger who recently graduated from the Mindanao State University in the Philippines, has captured his nation’s heart with his inspirational story.

Jeb grew up with his siblings in a landfill in Cagayan de Oro City, where he collected garbage to make ends meet.

They collected food, empty bottles and anything that could be recycled to sell and make money to help their parents!

“We sold the scraps and bottles to the junk shops,” Jeb told Rappler.

But Jeb’s dad always told him education comes first, and made sure he went to elementary school.

“My father always advised me to go to school,” Jeb said.

Sadly, poor Jeb was always bullied by the other kids because he smelled like trash from always rummaging around in the garbage for his family.

He had such a tough time at school, and couldn’t even eat his lunch in peace. Whenever he took out his food, the other kids “grimaced because they knew that it came from the trash.”

After a while, Jeb just couldn’t take it anymore.

His parents tragically passed away when he was 12—his dad from tuberculosis, and his mom shortly after from a hypertension attack.

Jeb eventually quit school and looked after his siblings. It seemed like all hope was lost and he’d have to spend the rest of his life collecting trash!

One day, his fortune changed. In 2007, he met Thomas Kellenberger a former policeman from Switzerland and founder of the Island Kids Philippines Foundation.

Thomas’ foundation helped turn Jeb’s life around! Jeb got an allowance, somewhere to stay and most importantly, he got the chance to go back to school!

“I continued my studies because I wanted to learn,” Jeb said. “I didn’t want people to look down on me.”

He was super determined, and soon completed his elementary education, while passing the ALS Assessment and Equivalency Test.

He even made it to the dean’s list in his first ever semester in college! What an achievement!

Now, Jeb just wants to give back to his community, and wants to become a teacher. He’s well prepared, and has already sat the licensure exam for teaching!

“Beyond that, I am planning to stay with the IKP Foundation where I can volunteer as an ALS teacher,” he said.

Jeb is proof that no matter what your background or circumstances may be, if you are determined, you can make your dreams come true!