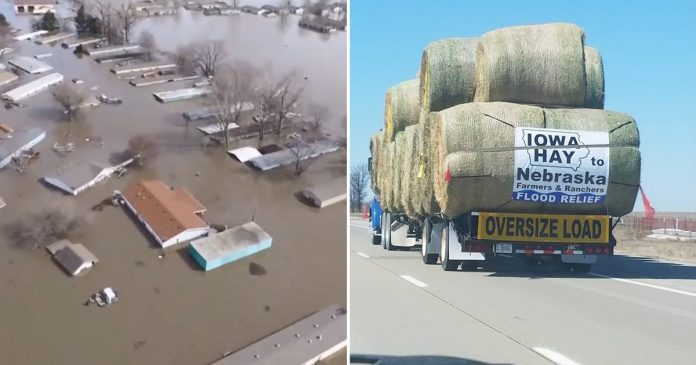 Thousands of people have been affected by the tragic floods in Nebraska, which are some of the worst in the state’s history. Farmers, in particular, have been hit the worst as some of them have lost both their homes and their livelihoods.

But this kindhearted group of farmers from Iowa restores our faith in humanity, by getting together to help those in need.

These trucks are loaded down with hay donated by farmers from Mt. Vernon and Ely. On their way to Nebraska to aid flood victims. The story of how this incredible community effort came together in just days tonight on @cbs2iowa @fox28Iowa pic.twitter.com/0KeTd9y8y3

Farmers Robert Broulik and James Garnet are leading the way to send hay bales all the way to Nebraska!

Hay is essential for farmers, as it is used to feed their livestock, but sadly, lots of it was destroyed in the floods.

So, the group loaded huge trucks with the stuff and sent them off to Nebraska on a six-hour ride.

“There’re two other farmers donated hay. Some people that knew we were doing it gave us money for fuel and stuff. It’s just kind of what the farming community always does,” James said.

James added that when he was ill, the supportive farming community helped him out. It seems like they always look out for one another when times are tough!

Robert said, “Took us better part of the day yesterday to just get the trucks ready and get the hay loaded, get it tied down, get it ready to go.”

“Anybody know the miles?” He asked, “Two hundred fifty?”

The trucks even had massive signs with supportive messages for those affected in Nebraska.

It seems like their kind gestures caught on with others, as the group said they spotted more trucks going to Nebraska to help out like them! Way to go!

“Goodness is about character – integrity, honesty, kindness, generosity, moral courage, and the like. More than anything else, it is about how we treat other people.”

His fiancée suddenly forgot who he was months before their wedding!...