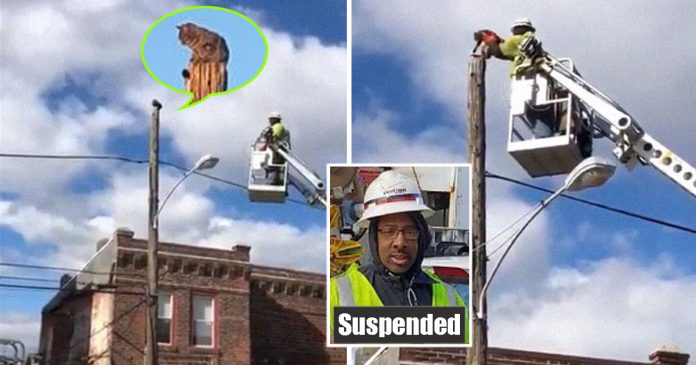 A man who worked for Verizon was suspended from his job for rescuing a poor cat which was stuck on top of a telephone pole.

Maurice German just wanted to help when he saw the stranded kitty in a neighborhood in Port Richmond, Pennsylvania, last Saturday.

“Momma” the cat is rescued in Port Richmond after a long ordeal. See how the community came together to get it done on #CBS3 at 11. (?= Amanda Boyce) pic.twitter.com/N2hlGoQGNC

The cat’s owners were devastated when they had no luck contacting the animal rescue, the fire department, and other organizations for help.

The poor thing had been stuck there for 12 hours!

Resident Amanda Fairchild Boyce told CBS she noticed the cat was first stuck at around 10.30pm on Friday.

So Maurice got to work straight away—he used a boom lift to get to the feline while onlookers applauded his bravery.

The cat made it back to its owner safely and was unharmed—unfortunately, Verizon didn’t seem to take to his heroic deed well.

In fact, they suspended him for 15 days for using their equipment in that area to rescue the cat.

While the neighborhood was grateful for his act of kindness, Verizon was adamant his suspension was the right thing to do.

“We take no joy in this job action. However, we’re committed and responsible for keeping our employees and customers safe while working in a particular area,” Verizon spokesperson Rich Young told CBS Philly.

Verizon said its field technicians need to take part in safety training exercises for the sake of both customers and workers.

“Unfortunately, while this employee’s goal was admirable, he potentially put his life and those around him in jeopardy,” he added.

While our actions may not be popular, it’s in the best interest of our employees and the communities we serve.”

Amanda took to Facebook to voice her anger over their heartless decision and called on the internet to spread the word about his generosity.

“Last weekend a Verizon employee came to the rescue of a cat outside of my home stuck on top of the telephone phone. This generous man is now at risk of losing his job. Please share this photo and hashtag #verizon.

“Spread the word! This simple gesture can show the company that we support this man and his generosity,” Amanda wrote in a touching post.

Since then, a GoFundMe page in support of Maurice titled “Heroes come in all forms” has gone viral and raised over $3,000 so far!