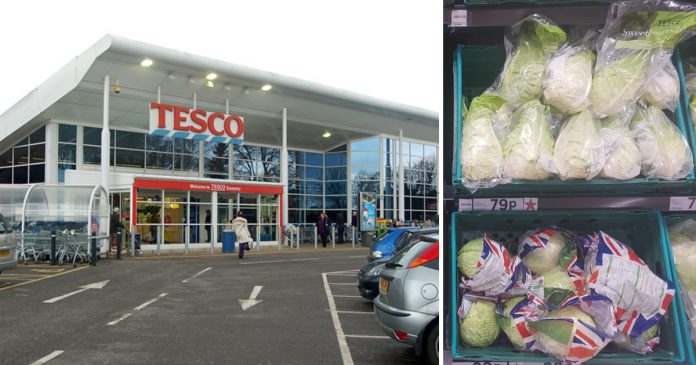 In a bid to reduce plastic pollution, Tesco will only sell fresh fruits and vegetables unpackaged and will no longer sell its fresh produce in plastic packaging.

As shoppers have become increasingly aware of the harmful consequences caused by using plastic packaging and plastic bags, the chain made a move in a trial aiming to reduce plastic pollution.

The move could prevent the production of millions of plastic bags and punnets.

Tesco said that it would monitor each of the 45 fresh produce that will be sold loose if the move increased food waste.

The move comes in response to a backlash from shoppers who are concerned about how much damage plastic packaging could bring to the environment.

The chain is the latest addition to reduce plastic pollution initiative as other major chains like Marks & Spencer and Iceland have already joined the bandwagon in a bid to favor paper bags and other recyclable materials as opposed to plastic packaging.

Other chains like Morrisons and Waitrose are also moving in the same direction.

A spokesperson for Tesco said, “Customers will see fruit and vegetables including varieties of apples, mushrooms, peppers, onions, bananas, and avocados free from their packaging.”

Tesco’s director of quality, Sarah Bradbury said that the chain wants to reduce the use of plastic packaging as much as possible. “We want to remove as much plastic as we can from our products, only using what is necessary to protect and preserve our food,” Bradbury said.

“We hope this trial proves popular with customers. We’ll be keeping a close eye on the results, including any impact on food waste.”

“Whatever happens, we’re going to keep reducing the amount of packaging we use and ensure everything on our shelves is fully recyclable.”

The chain’s customer, Jean Chattergee said, “To know there is a store taking steps to reduce plastic packaging would make me use it. I am quite happy to pick up loose items and put them in a paper bag or my own bags.”

Meanwhile, another customer of Tesco, Mark Eliades said that putting fresh produce in plastic bags is unnecessary and that he fully agreed with the chain’s latest move.

“I am 100percent behind this idea. We have to do something. I have to smile when I see people picking up bananas and putting them in plastic bags,” Eliades said.

“I am an outdoors type of person so am regularly out fishing and it’s so upsetting when you see the amount of plastic and rubbish floating by on the water,” he concluded.

At the moment, the move is in a trial at the chain’s two stores in the United Kingdom, Watford and Swindon, but the chain hopes to extend it to all of its supermarkets should the trial runs successfully.