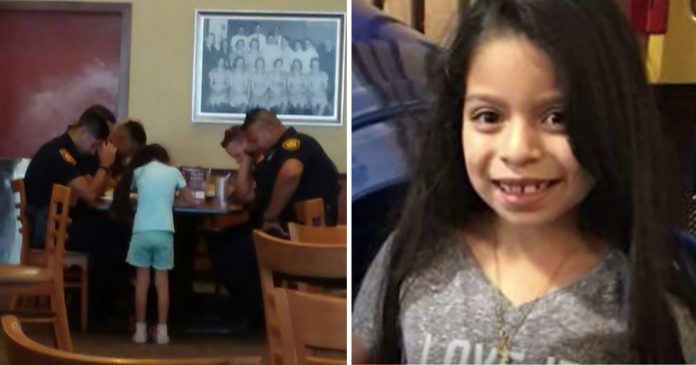 It’s undoubtedly true that little acts of kindness go a long way. That’s the view of an 8-year-old girl from Texas, who surprised police officers when she asked if she could pray for them at a restaurant in San Antonio.

Paige Vasquez made the heartwarming gesture after seeing the group of eight, as she knew that police officers always go above and beyond to do their best for their communities.

“I always pray for people because, and police officers, because I know they have a rough time sometimes and sometimes a little prayer can make someone’s day so I decided to do that just in case they’re having a rough day,” Paige told InsideEdition.com.

Just a tiny gesture of kindness can make the biggest difference and you could end up completely brightening someone’s day.

“I asked them, ‘Hello officers, may I please pray for y’all?’ And they said, ‘Yeah, sure!” She added.

Paige just went up to their table while they were having their meal, and they all bowed their heads and prayed together.

Paige’s mom, Kat, was so proud of her little girl so she wrote a Facebook post about the heartwarming moment. The San Antonio Police Department shared the post too!

“One of the mothers of the officers that was sitting at the table messaged me recently, and she said that her son went home and he was very moved by what she said,” Kat said.

Kat said her daughter has always been kindhearted, and always thinks of others.

“She’s very caring. She’s very loving. She has a very old soul. It’s just something that comes to her naturally. It just amazes me just because she’s so young,” Kat explained.

It turned out the kind gesture meant a lot to the bunch of police officers, because they were just mourning the death of a fellow police officer Michael Moreno.

“A wonderful moment to lift our spirits on the hardest of days…,” the San Antonio Police Department wrote on Facebook.

The eight-year-old said she isn’t shy about asking strangers if she can pray for them, because she believes it might be what they need at that moment.

Paige said, “You should always pray for someone, no matter what,” she says. “It might just brighten someone’s day!”

Man transforms shipping containers into shelter for the homeless and they...