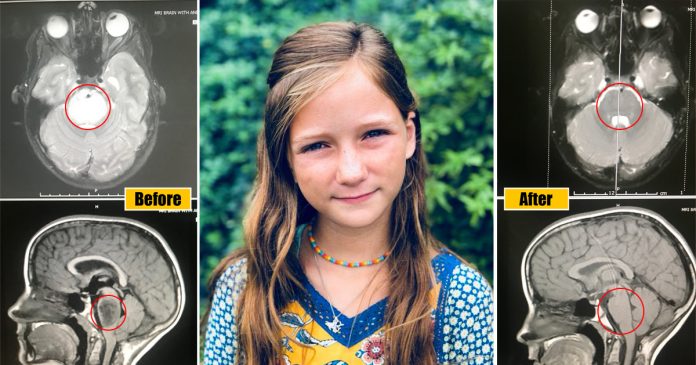 A family from Texas now believes in miracles after their 11-year-old daughter’s “incurable” brain tumor suddenly disappeared one day! Even her doctors are amazed.

A DIPG is tumor which can be found at the base of the brain, and is really difficult to treat due to its highly aggressive nature, according to Boston’s Children’s Hospital site.

Her family was concerned after she started suffering from nausea, headaches and double vision.

Doctors told the Doss family her condition was extremely rare and that it is a “devastating” disease.

Virginia told HuffPost her case was terminal. “We don’t have a cure,” she said.

Her parents were devastated when they heard the bad news.

“It was the worst news we could have had. At Dell Children’s, Texas Children’s, at Dana-Farber, at John Hopkins, and MD Anderson, all agreed it was DIPG,” Roxli’s dad, Scott Doss said.

But her parents didn’t want to give up hope, and Roxli underwent 11 weeks of radiation.

They also prayed to God to ask for a miracle.

“The doctors guide us, but really the true guidance that we’re looking for is from God because that’s who we need our help from right now, and we’re really just praying for a miracle,” Scott said.

They had the shock of their life when their prayers were finally answered!

Suddenly, with no explanation, their beloved daughter Roxli was rid of her tumor on Sept. 10, 2018.

Doctors were astonished that the MRI scan didn’t show a trace of the tumor which they thought was incurable.

“When I first saw Roxli’s MRI scan, it was actually unbelievable. The tumor is undetectable on the MRI scan, which is really unusual,” Dr. Harrod said.

Roxli’s parents were over the moon.

“After 2+ months of fervent and faithful prayers for healing from this community and across the country, GOD HAS ANSWERED OUR PRAYERS!!” Scott shared on Facebook, along with images of Roxli’s MRI scan.

Roxli’s mom, Gena, described the whole thing as a “miracle” on CaringBridge.org.

“We all walked out in shock even though we had been begging, praying, asking and believing. Thank you Jesus just wasn’t enough to say.”

“God is using precious Roxli as a vessel for His mighty power! REVIVAL is springing up in hearts everywhere!” Gena wrote.

Although her brain tumor has gone completely, Roxli is now having precautionary treatments such as immunotherapy to make sure not a single cancer cell remains!

We wish Roxli and her family all the best!