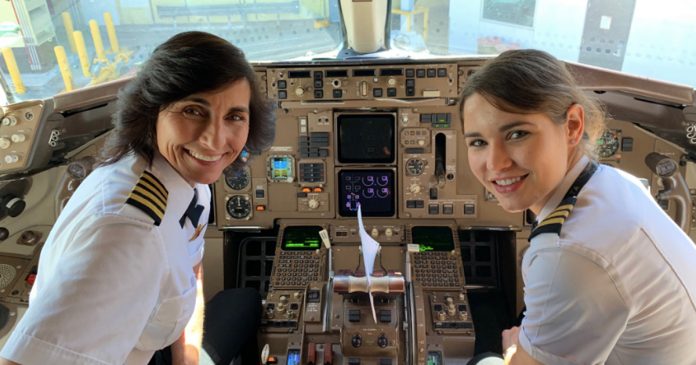 An inspirational mother and daughter pilot duo went viral when a Delta Airlines passenger tweeted a photo of the pair after his flight from Los Angeles to Atlanta on March 16.

Passenger Dr. John R. Watret couldn’t believe his ears when he heard the mother-daughter team, Captain Wendy Rexon and her daughter, First Officer Kelly Rexon were the pilots of the Delta Boeing 757 flight .

He just had to pay them a visit in the cockpit and took a photo to share with the world!

“Just flew with this mother-daughter flight crew on Delta from LAX to ATL. Awesome,” John tweeted.

“Inspiring for young women,” he added.

The internet couldn’t get enough of the pair.

“Mother and daughter that is phenomenal wow,” one Twitter user commented.

While another said, “That’s badass!!!”

Meanwhile, some people said they wouldn’t be able to fly with their mum—the pressure would be too much!

“That’s pretty cool…..question is, was mother holding on to the sides of her seat for dear life when daughter was at the controls? That’s what my parents do when I’m driving anyway….,” one person said.

Another quipped, “That is just the most amazing, wonderful news ever – seriously.  My mother and I would never have flown together as crew.  We couldn’t even agree on having the radio on/off in the car.”

Delta Airlines themselves joined in the fun and called the mother-daughter team “Family flight crew goals!”

“John, thank you so much for the shout-out of this dynamic duo. We are very #DeltaProud of Wendy and Kelly! #KeepClimbing OCH,” Delta Airlines tweeted.

John, who works as the chancellor of the Embry-Riddle Aeronautical University’s Worldwide Campus, said seeing the duo meant a lot to him as Embry-Riddle is committed to creating opportunities for women in the aviation industry.

“There has to be more diversification in the industry.

“It’s crucial and one of the key factors we focus on. When there are more opportunities, everyone wins,” John said.

According to the Embry-Riddle newsroom, only 7 percent of pilots in the U.S. certificated by the U.S. Federal Aviation Administration were women in 2017.

Flying runs in the Rexon family too! Kelly’s sister and Wendy’s husband, Michael are both pilots, while Wendy’s father, Bill, is a former pilot for Northwest Airlines.

“The first officer had a great role model for becoming a pilot – her mother. It’s good for aviation and inspiring for all of us,” John added.