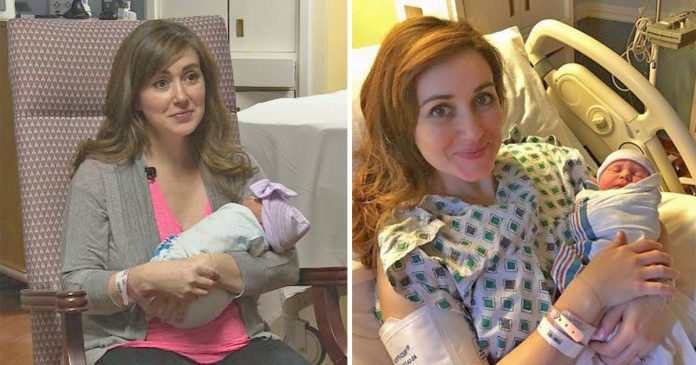 As an obstetrician and gynaecologist, Dr. Amanda Hess knows very well how unpredictable labour and delivery are but it was not until she gave birth that she learned how insanely unpredictable it could be.

In July last year, Hess who was well into her ninth month of pregnancy was preparing for the birth of her second child. She checked into Frankfort Regional Medical Centre, where she works, as a patient on her induction date.

Hess was on leave two days prior before she checked into the hospital.

However, as she settled in her room, she heard that a newborn baby girl whose umbilical cord was still around its neck was in distress while the on-call doctor was on break.

Hess quickly sprung into action when she heard the news.

“I just put on another gown to cover up my backside and put on some boots over my shoes, to keep from getting any fluid and all that stuff on me, and went down to her room,” she told local news station WKYT.

Thanks to Hess’ quick action, the baby girl was saved. After she ensured that both the baby and the mother were stable, she returned to her room and gave birth to her own.

The mother of the baby who Hess had saved, Leah Halliday Johnson, was obviously more than grateful and surprised when she learned what Hess did for her.

“Pretty amazing what she did,” she told news channel Lex 18. “I feel very lucky she was there and the type of person she is and steps up to do what she did. We really appreciate her.”

We know that doctors are some of the professions that are never really off the clock but Hess took it to the next level. Thank you, Dr. Hess!